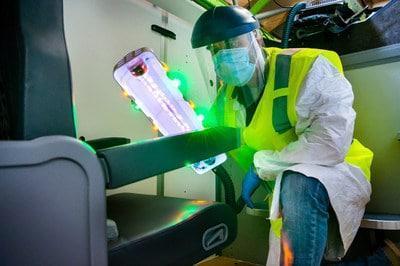 As efforts to fight COVID-19 and bring air travel back continue, companies are working overtime to ensure that there are measures in place to enhance the safety and well-being of passengers and crews.

As part of its Confident Travel Initiative (CTI), Boeing has developed an ultraviolet (UV) wand designed to sanitize airplane interiors. The UV wand uses 222 nanometer UVC light, which is known to inactivate pathogens effectively. According to Boeing, the UV wand sanitizes a flight deck in less than 15 minutes.

The company has signed a patent and technology license with Healthe Inc. by which the Florida-based company will manufacture  and distribute the commercial wand. The technology could be available for airlines in late fall. Etihad Airways was the first to evaluate the device, with the UV wand being demonstrated on the Etihad 787-10 ecoDemonstrator airplane on Aug. 21.

The device will be used in addition to sanitizing and protective measures already in place, which include the use of high-efficiency particulate air filters that trap more than 99.9% of particulates and prevent them from re-circulating back to the cabin.

“The UV wand is designed to be more effective than similar devices. It quickly disinfects surfaces on an airplane and further strengthens other layers of protection for passengers and crew,” said Mike Delaney, who leads Boeing’s CTI efforts. “Boeing spent six months transforming an idea for the wand into a working model, and Healthe will now take that prototype and make it available to the world at large.”

“We are proud to be assisting Boeing as they work with their partner airlines to enhance in-cabin plane sanitization efforts. This could also benefit schools, hospitals, offices, wherever pathogens go,” said Abe Morris, Healthe executive chairman.