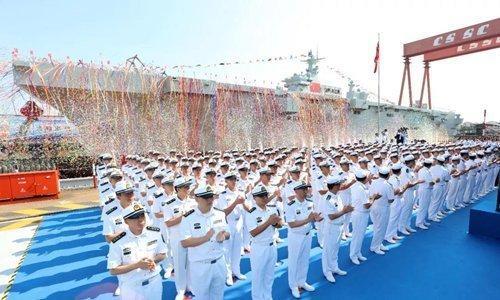 A second Type 075 amphibious assault ship for the Chinese Navy has been launched by Hudong-Zhonghua Shipbuilding, a major shipbuilder under China State Shipbuilding Corp. The transfer of the nearly completed warship into water is a major milestone and Chinese engineers will now start outfitting the vessel’s equipment along with conducting mooring tests and sea trials.

The Type 075 amphibious assault ship, will also be used as a helicopter carrier and the launch of the first Type 075 vessel, took place in September at Hudong-Zhonghua. An additional ship in the Type 075  Class is also planned.

The first Type 075 vessel was recently damaged by a fire which broke out but now appears on track for completion.

The Type 075 amphibious assault ships displace nearly 40,000 metric tons and are approximately 250 meters long, around 30 meters wide and will

The Type 075 warships will be able to carry many more helicopters and a stronger force of landing craft, as compared to the Type 071 amphibious transport dock ships now in operation