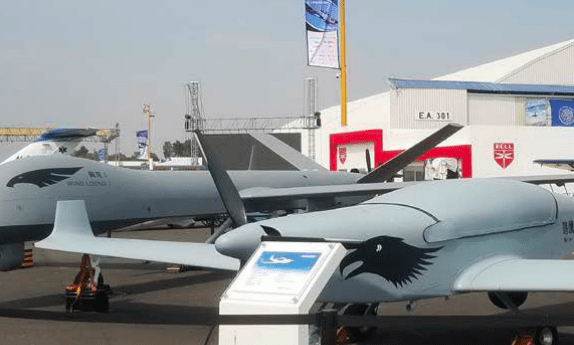 China’s Wing Loong 1 and Harrier 1 unmanned aerial vehicles (UAVs), which have proved popular in the Middle East and Asia, are attracting attention at the ongoing FAMEX.

Wing Loong 1, developed by the Chengdu Aircraft Industry Group, is a Medium-Altitude Long-Endurance (MALE) UAV and is used for use as a surveillance and aerial reconnaissance platform. The drone can be fitted with air-to-surface weapons for use in an unmanned combat aerial vehicle (UCAV) role and can also carry the BA-7 air-to-ground missile, YZ-212 laser-guided bomb, YZ-102A anti-personnel bomb and 50-kilogram LS-6 miniature guided bomb.

The aircraft, which closely resembles the GA-ASI-made Reaper drone, is substantially cheaper than the US-made UAV.

In October last year, media reports said that the company would sell 48 high-end armed drones to Pakistan. Harrier 1, developed by Guizhou Aircraft Industry Corporation (GAIC), has a low wing configuration, as well as the retract-able tricycle land gear system. The other UAVs in the Harrier Hawk series are Harrier Hawk 11 Air Sniper and Harrier Hawk 111.