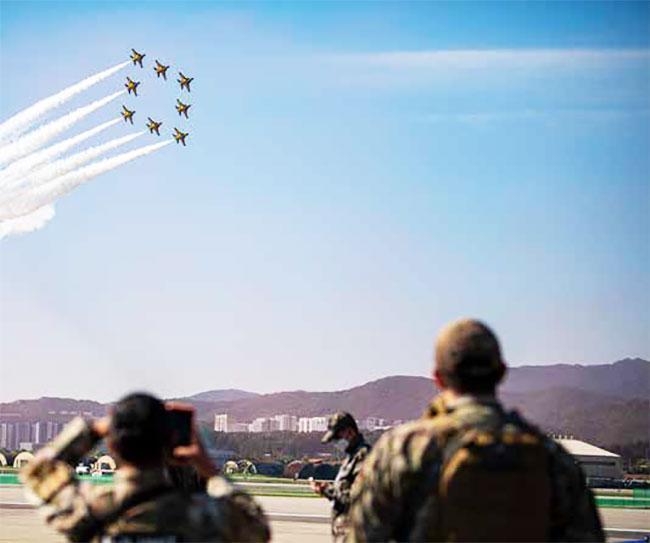 South Korea is currently in negotiations with Norway, Saudi Arabia, UAE and Qatar for the export of defence products manufactured by its domestic companies. Lee Jong ho, who is in charge of the ADEX Co-operation Department, told reporters that the biennial event, which opened on Tuesday, would aid South Korean efforts to support the domestic defence industry in its efforts to find international buyers.” Even though we are experiencing Covid-19, we were able to expand the exhibition area,” he said. “We expect greater results in marketing a new line up of products.” Robust business activities are expected to take place during the event as about 300 decision makers from 45 participating countries, including defence ministers and heads of staff, are attending, Jong ho said. Bigger than ever: Despite the pandemic, the current edition of ADEX is the biggest ever, with 440 companies from 28 countries participating.

As many as 68 types of aircraft and ground equipment are part of the static display and outdoor exhibition. Among the items on display are hydrogen-fueled large drones, space development related equipment, virtual reality-based training systems, laser weapons systems, and multi-purpose unmanned vehicles. The country’s defence ministry has set up a special unit at the event to promote 72 types of unmanned aerial, terrestrial, and marine systems produced by the domestic defence contractors. Also, a part of the five-day event are 22 seminars on a wide range of topics. Although South Korean defence companies such as Hanwha and Korea Aerospace Industries (KAI) are hogging much of the limelight, almost all the major international defence contractors such as Saab, Leonardo, Boeing, Lockheed Martin and Raytheon Technologies are showcasing products and capabilities at the event. As a prelude to the main event, Republic of Korea Air Force’s acrobatic flight team, Black Eagles, carried out flyovers over the venue, along with a KC-330 military tanker transport aircraft, a RF-16 reconnaissance plane, F-15K and KF-16 jets. No prototype, but KF-21 Life-size Model on Display.

The much-anticipated display of the KF-21 prototype isn’t happening at ADEX 2021, but Korea Aerospace Industries is displaying a life-sized model of the country’s first indigenous fighter jet. The first prototype of the KF-21 Boramae/Fighting Hawk was completed and unveiled in April this year during a rollout ceremony at the headquarters. The prototype had to be partially dismantled for more testing, causing concern about whether the development and production of the aircraft would be delayed. However, KAI chief engineer Lee Il-woo allayed fears on Friday by stating that the projects are on schedule.

A joint South Korean/Indonesian 4.5 generation fighter aircraft, KF-21 is stealthier than other fourth generation fighters but does not carry weapons in internal bays like fifth-generation fighters. The first test flight is anticipated in 2022 and manufacturing is scheduled to begin in 2026. The Republic of Korea Air Force will take delivery of at least 40 aircraft by 2028 and has plans to deploy as many as 120 of the type by 2032. Indonesia will pay 20% of development costs of US$7.6 billion and will take delivery of aircraft and benefit from technology transfer. KAI is also currently developing the LAH (Light Armed Helicopter) that is designed to replace the Republic of Korea Army (RoKA)’s aged attack Helicopters (500MD, AH-1S).

The first flight of LAH was successfully conducted in 2019 and the company plans to complete its development in 2022. At the event, the company is also displaying the FA-50, the T-50 simulator, the KUH export prototype and the amphibious combat helicopter.