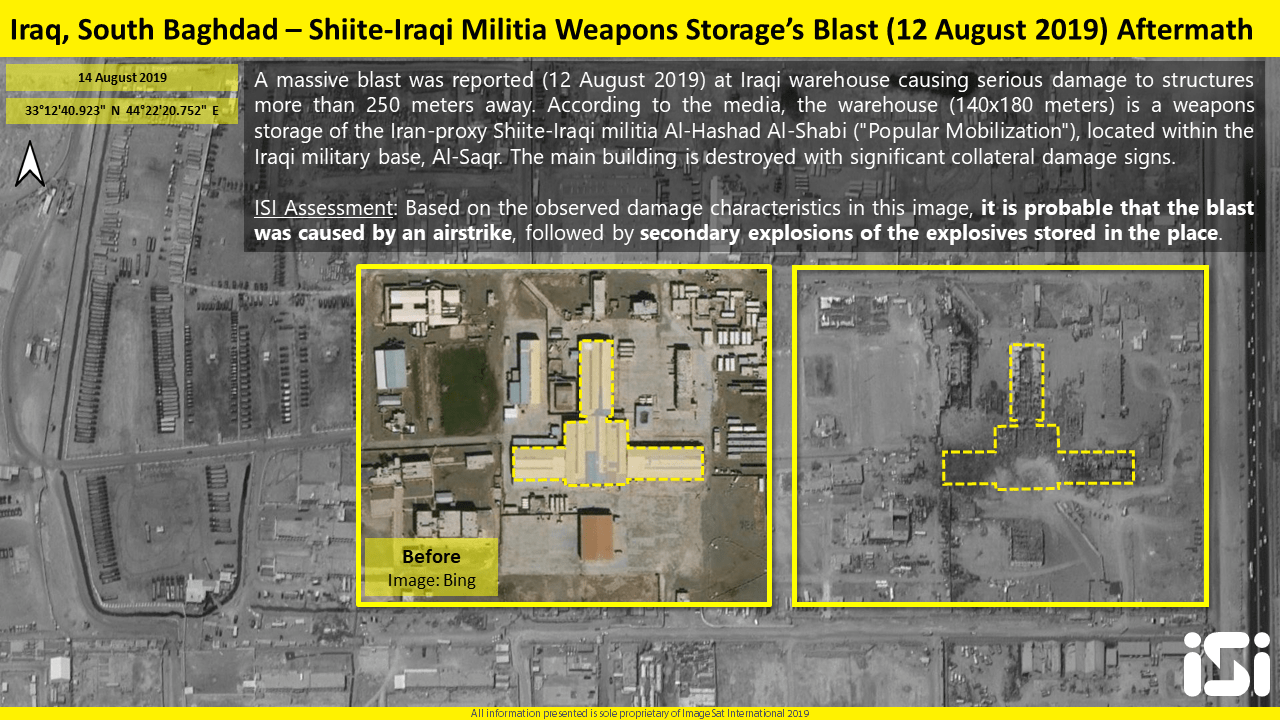 Experts are trying to determine what weapon systems were used in the mysterious aerial attack of a target in Iraq on August 12, that allegedly was performed by Israel.

The attack, caused heavy damage to the storage site.

According to an intelligence report made by ImageSat International (ISI), an Israeli company that operates spy satellites, says that it is likely that this was an aerial attack that caused a great deal of damage to the target.
The weapon systems used in the attack, according to the ISI report, resulted in secondary explosions of ammunition stored on site and also significant secondary damage to buildings within the radius of over 250 meters.

Reports after the attack pointed to the fact that one person was killed and 29 others were injured after explosions were reported at a base of Iranian-backed Shia militias south of Baghdad, Iraq.

Shortly after, shells fell in the Green Zone of Baghdad where the American Embassy in Iraq is located, according to Sky News Arabia.

The Iraqi Ministry of Health earlier said 13 people were injured in the explosion, according to the Iranian IRNA news agency.

An Al Mayadeen correspondent reported that the explosions were caused by shells hitting the base held by al-Hashd ash-Sha’abi or Popular Mobilization Units (PMU) located in the Abu Dshir area, according to preliminary information.

An Iraqi military source said that unidentified aircraft targeted warehouses of equipment and missiles belonging to the Popular Mobilization Forces militia at the Al-Saqr military base south of Baghdad. The shelling completely destroyed the stores. Dozens of injuries were reported from the Quds Force and members of the Hezbollah militia at the base.

Israel has declared that it will not allow Iran to transfer advanced missiles to the Hezbollah in Lebanon.