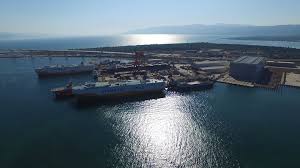 Turkey’s Sefine Shipyard provided DIMDEX 2022 visitors a view of the scale model of its unveiled its Constellation-class unmanned fast-attack and patrol vessels. The event concluded on Wednesday.

The USVs – christened “Constellation class,” will have sub-classes for different purposes and is designed to carry out electronic warfare, ASW, and mine warfare missions. Having an operational range of 600 nautical miles, the vessels can be transported by cargo aircraft, naval ships, or land to the mission area. The design of the USVs are such that their payload capacity can, if needed, be increased to carry more weapons and systems.