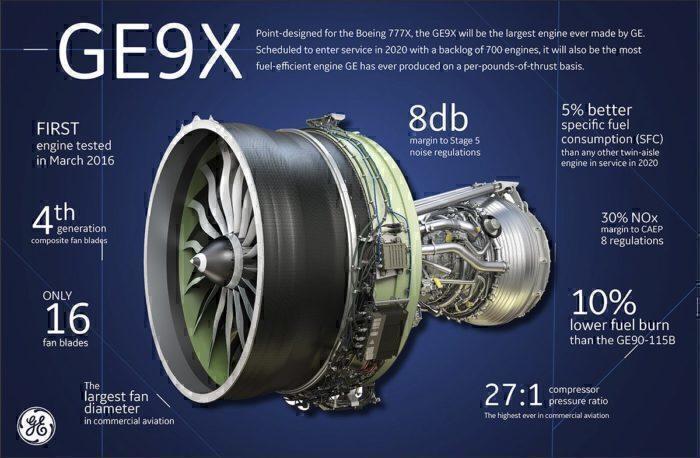 GE Aviation’s GE9X engine, which will power the Boeing 777X, has been certified by the Federal Aviation Administration (FAA).

The engine certification comes eight months after Boeing completed the first flight of the 777X on Jan. 25. Lufthansa is the launch airline for the 777X, which Boeing expects to enter into service by 2022.

The FAR (Federal Aviation Regulation) Part 33 certification involved nine test engines. This certification achievement culminates GE Aviation’s renewal of its commercial jet engine portfolio, including the GEnx for the Boeing 787 Dreamliner and the CFM LEAP engine.  The GE9X test engines have completed just under 5,000 hours and 8,000 cycles for certification.

The company has delivered eight GE9X engines and two spares to Seattle for testing in Boeing’s 777x test planes,  it said on Sept. 28. The engine manufacturer is also continuing its ground testing on the GE9X engine to achieve Extended Operations (ETOPS) approval and maturation tests to help engineers prepare to support the engine when it enters into service.

“It takes the world’s best talent in jet propulsion to create a game-changing product like the GE9X engine,” said John Slattery, president and CEO of GE Aviation. “There is no substitute that can achieve the combination of size, power and fuel efficiency of the GE9X. This engine will deliver unsurpassed value and reliability to our airline customers.”

The GE9X sets the new standard for engine performance and efficiency, thanks to the incorporation of GE’s most advanced technologies developed over the last decade,” said Bill Fitzgerald, vice president and general manager of Commercial Engines Operation for GE Aviation.

For service and support of its customers, GE has established GE9X engine training courses at its Customer Technical Education Center (CTEC) facility in Cincinnati. A GE9X engine currently at CTEC is being used to develop lean maintenance practices that will be implemented in customer training modules and GE training procedures.