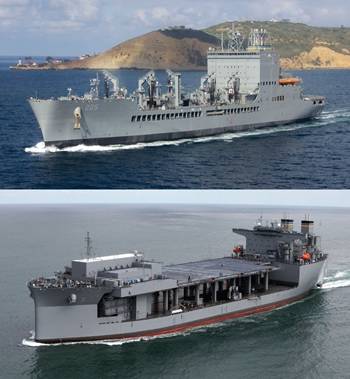 General Dynamics NASSCO has been awarded US$600 million in U.S. Navy contract modifications for long-lead-time material to support the construction of the seventh and eighth ships in the John Lewis-class fleet oiler (T-AO) program, as well as the sixth ship in the Expeditionary Sea Base (ESB) program.

The contract modifications for long-lead-time material provide $500 million for T-AO 211 and 212 and $100 million for ESB 8. Construction is scheduled to begin in the third quarter of 2023 and continue into 2027, providing the opportunity to sustain and grow the workforce along San Diego’s working waterfront.

ESBs are highly flexible platforms designed to support multiple maritime-based missions, including Air Mine Counter Measures (AMCM), Special Operations Forces (SOF), and limited crisis response. Acting as a mobile sea base, the 784-foot ship has a 52,000 square-foot flight deck to support MH-53, MH-60, MV-22 tilt-rotor, and H1 aircraft operations. Following the delivery of the first five ships to the U.S. Navy, the sixth ship, the USNS John L. Canley, was christened on June 25. The USNS Robert E. Simanek (ESB 7), the seventh ship, is currently under construction.

In 2016, the Navy awarded NASSCO with a contract to design and build the first six ships in the next generation of fleet oilers, the John Lewis-class (T-AO 205), previously known as the TAO(X). Designed to transfer fuel to U.S. Navy carrier strike group ships operating at sea, the 742-feet vessels have a full load displacement of 49,850 tons, with the capacity to carry 157,000 barrels of oil, a significant dry cargo capacity, aviation capability, and up to a speed of 20 knots.