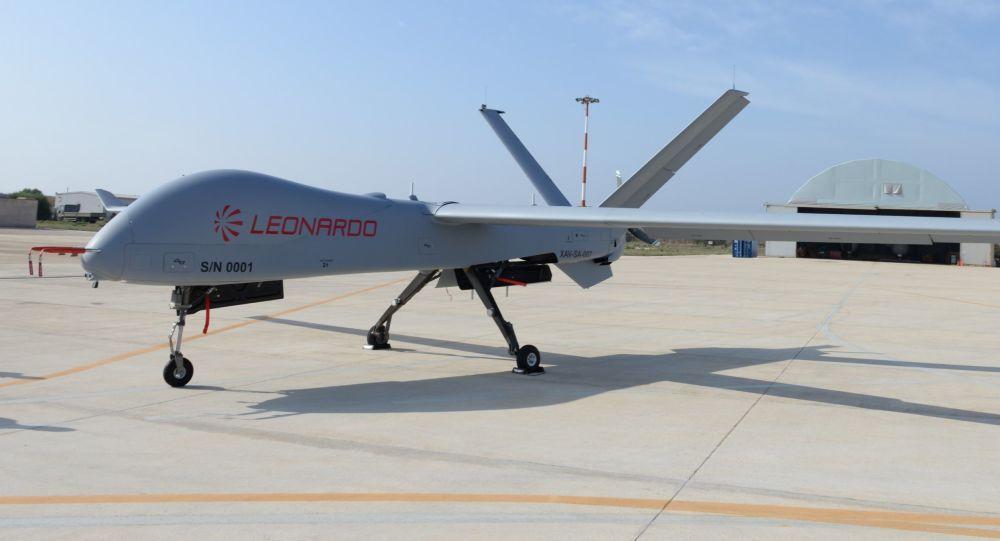 The Falco Xplorer Remotely Piloted Air System (RPAS) being developed by Leonardo, is already attracting strong market interest, in an encouraging sign for the new platform. First unveiled at last year’s Paris Air Show, the Falco Xplorer is the largest drone built by Leonardo with a Maximum Take-Off Weight (MTOW) of 1.3 tons and an operating ceiling above 24,000ft.

It is being designed to offer persistent, multi-sensor strategic sur- veillance to military and civil customers and will be made available either as an integrated system or as a fully-managed information-superiority service, flown and operated by the company. The new drone is being promoted as an afford- able and potent option for Intelligence Surveillance and Reconnaissance (ISR). Since the Falco Xplorer is not subject to International Traffic in Arms Regulations (ITAR) restrictions and meeting the criteria for Missile Technology Control Regime (MTCR) class II, it will be readily exportable.

“We have already been speaking to a range of potential new customers about the Xplorer. We have received some requests for quotation and had some productive discussions with further potential new customers following the launch of the system at Paris Air Show last year and again in November when the plat- form was exhibited at Dubai Air Show, where we saw a great deal of interest,” says Q Fabrizio Boggiani, SVP Airborne Systems – Electronics Italy at Leonardo. The Falco Xplorer is also being proposed for military and non-military arms of the Italian government.

“There will be further flight campaigns over the next few months which will assess the aircraft’s full range of capabilities including its integrated sensor system. These campaigns will also certify the Falco Xplorer against NATO’s airworthiness STANAG 4671, dramatically expanding the territory over which it can operate,” Boggiani adds.

The new drone aircraft made its first flight in January, when Falco Xplorer S/N0001 took off from Trapani Air Force base. “We are pleased to report that the Falco Xplorer behaved even better than predicted during the first flight. The flight was also the first good opportunity to collect data which we can now re-introduce to our modelling to improve the simulations, all of which contributes to our continuing to develop the Xplorer in a cost-effective manner,” says Boggiani. Leonardo also intends to certify Falco Xplorer for use in non-segregated airspace.

The Falco Xplorer combines endurance of over 24h with a max payload of 350kg and also feature an integrated sensor system, which will include the Gabbiano T-80 multi-mode surveillance radar, SAGE electronic intelligence system, an Automatic Identification System (AIS) for maritime missions and an Electro-Optical (EO) turret. An optional hyperspectral sensor will allow the drone to monitor pollution and agricultural development and native satellite link capability allows for beyond-line-of-sight operations. An open system architecture means that third- party sensors can be easily integrated.