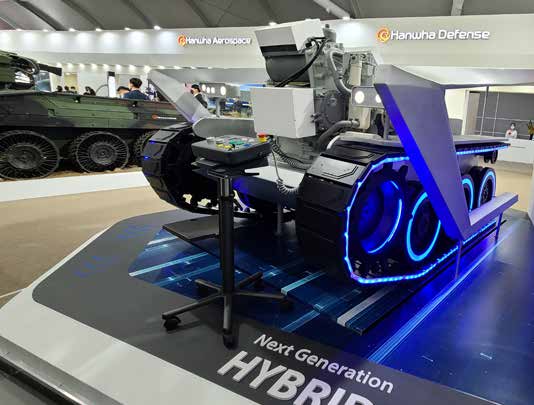 “ENSURING A STABLE POWER SUPPLY, ELECTRIFIED VEHICLES ARE TO PROVIDE AMPLE BENEFITS IN THE BATTLEFIELDS SUCH AS SILENT MOBILITY TO ESCAPE ENEMY DETECTION, INCREASED FUEL EFFICIENCY, AND FLEXIBLE FUNCTIONAL
MODES.”

The Korean firm has won a state project to develop a hybrid electro-mechanical transmission system over the next decade to be fitted into futuristic tracked armored vehicles.

Hanwha Defence is scheduled to develop core technologies of the Hybrid EMT by 2025 as per the plans of the South Korean government project. It will subsequently develop the EMT system over the next five years, in technical cooperation with Austria’s AVL, specialized for the development, simulation and testing of powertrain systems. Hanwha Defence has produced and delivered over 8,500 cutting-edge combat vehicles to South Korea and numerous countries, including Malaysia, Norway, Finland, Estonia, Poland, Turkey and India.