HR-SHERPA BEING SHOWCASED AT ADEX 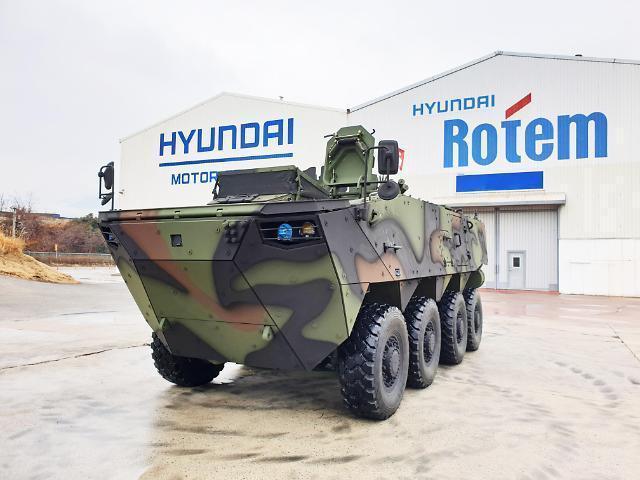 Hyundai Rotem is highlighting the capabilities of HR-Sherpa, its original multi-purpose unmanned vehicle, at ADEX. The vehicle is designed to support infantry troops.

The first concept model of HR-Sherpa, an electricity-driven multi-purpose unmanned vehicle developed both for military and private purposes, was unveiled at the ‘2018 Robotworld’ exhibition.

Since then, the company has succeeded in developing the technology and has successfully demonstrated security reconnaissance and unmanned operation capacities.

The six-wheel drive vehicle can move autonomously or via remote control to perform missions such as surveillance, medical support and chemical detection. It has a payload of 600 kilograms and a combat weight of 1,800 kilograms. HR-Sherpa is equipped with airless tires and powered by a battery with an operating time of six hours when traveling at 5 kph.

HR-Sherpa, which is capable of turning on its axis, can be loaded with a remote armed device, RCWS (Remote Controlled Weapon Station). The remote armed device sends surveillance footage in real time to determine attack remotely. This helps in carrying out remote attacks and self defence tasks. The vehicle also has subordination driving capability, which allows it to follow the soldier in front of the vehicle automatically. Its autonomous driving function allows it to make self-searches for designated routes for surveillance.

To ensure stable operation of unmanned vehicles, The company has developed a technology to recognize the surrounding environment that makes use of the LiDAR (Light Detection and Ranging) and video device sensor as well as artificial intelligence that allow a vehicle to make self-recognitions of things and possible areas for driving. The company is confident of using such technologies in vehicle for the private sector as well.

Earlier his year, Hyundai Rotem supplied 2 HR-Sherpa-improved multi-purpose unmanned vehicles to the Republic of Korea Army (ROKA), after successfully proving their capabilities. According to the company, the vehicle met all 25 required function evaluation items including maximum speed, going up the mount function (ability to drive on hill), and range. The major updates for the military version of the vehicle involve the upgraded autonomous driving sensor to reinforce functions required for military operations. The development of HR-Sherpa is part of Hyundai Rotem’s focus on advanced technologies such as remote-controlled weapon systems and active protection systems, taking into view the changes
that are changing in the battle landscape. The company is contracted to supply combat engineering vehicles by 2023 to the South Korean military.

Wheeled Armored Vehicles: The company’s 6×6 and 8×8 wheeled armored
vehicles (WAV) have been successfully deployed for the ROKA since 2017; it is also scheduled to deliver the third batch of K806 and K808 WAVs. The WAVs, which have an all-welded steel armor hull and provide protection against small arms fire and artillery shell splinters, are expected to replace the service’s aging series of tracked armored personnel carriers.

The K806 model of WAV, which are armed with a 12.7 mm machine gun and fitted with a central tire inflation system and run-flat tires, are primarily for the protection of convoys. The vehicle can move at a maximum speed of up to 100 kilometers per hour with up to nine fully-armed soldiers aboard.