India’s DRDO With Over 500 Products 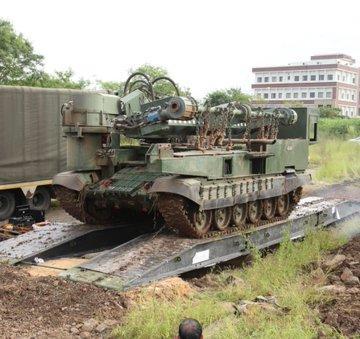 India’s Defence Research and Development Organisation (DRDO) is exhibiting more than 500 products from all technology clusters in line with the event”s theme ”Digital Transformation of Defence”.

“The display of various indigenously-developed military systems and technologies by DRDO will bring alive the spirit of self-reliance and national pride at the forthcoming DefExpo 2020,” a DRDO official says.

DRDO’s Counter Mine Flail (CMF) showed lot of interest among the visitors. The CMF system is based on a T-72 battle tank chassis, and is capable of creating a vehicle safe lane of 4.5 meter width in single pass by removing 100 per cent of anti- tank and 95 per cent of anti-personnel mines.

“The CMF system can withstand A/T mine blast containing upto 9 kg TNT equivalen,” the official informs. Its independent engine provides power for the flail system, and it has an automatic safe lane marking arrangement, and
has automatic controls to maintain the rotors at constant height above ground. The system can be deployed from the line of March within five minutes, he adds.