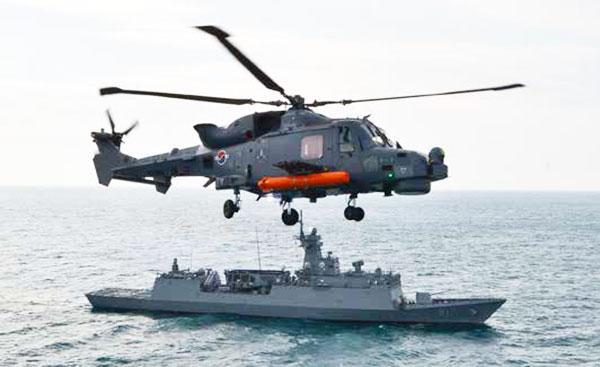 Leonardo is showcasing its latest-generation of surveillance and protection technologies, such as the E-Scan radar, directed infrared countermeasures (DIRCM) and its BriteCloud expendable active decoy, at the ongoing ADEX. These advanced systems are being offered to meet not only potential requirements within the RoK abut also in the region. Leonardo’s successful partnerships with various Korean manufacturers have already enabled the platform integration of multiple high-tech electronics systems for domestic and export customers.

“A key example of such partnerships is our MoU with Hanwha Systems, one of South Korea’s leading aerospace systems manufacturers, to jointly provide avionics and mission systems for the Republic of Korea and other international customers,” Pasquale Di Bartolomeo – Leonardo’s Chief Commercial Officer told Daily News. Leonardo is looking to grow its industrial presence and key partnerships in the Republic of Korea and other key Asia Pacific nations, Di Bartolomeo adds, which will also include manufacturing, strong R&D partnerships, and links between the company’s network of ‘Leonardo Labs’ innovation centers and regional universities. The company remains in constant communication with all of the major players in the RoK aerospace, defence and security sectors and is on the lookout for opportunities to work collaboratively on projects, which are pitched to meet the requirements of the Korean Armed Forces and export customers.

The European defence conglomerate Leonardo already has a longstanding and established presence in several Asia-Pacific nations, including the Republic of Korea (RoK), where the Navy operates its AW159 and Lynx helicopters in the military domain and the AW139 is well established for Emergency Medical Services operations. Amongst the advanced equipment supplied to the RoK is the Seaspray E-Scan (AESA) radar, fitted on the RoK Navy’s AW159 helicopter fleet, which is optimised for maritime use and provides long-range, wide-area surveillance capability.

“We have heard many positive comments about the performance of the radar. This technology is crucial in the detection of submarine periscopes and surface threats, using Leonardo’s patented small target detection mode to detect even the smallest targets in high sea states, such as submarine ‘snort’ masts or periscopes,” Di Bartolomeo said. Leonardo has continued to invest in radar technology and produced the first truly multi-domain AESA surveillance radar in the Osprey, which is also being promoted in the RoK and to other countries in the Asia Pacific region.