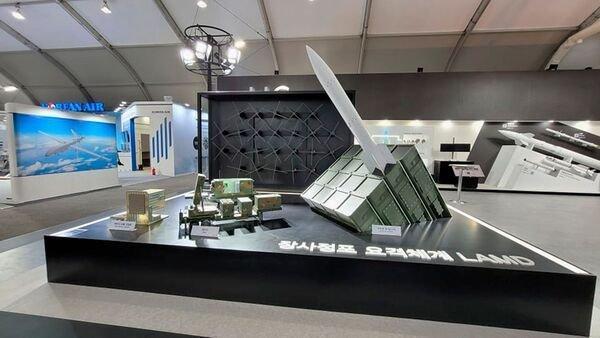 LIG Nex 1 is showcasing the concept for its low altitude missile defence system (LAMD) at the ongoing ADEX 2021.

The system, if selected by the government, will be used to counter potential 240 mm or 300 mm artillery attack from North Korea.

“The EMD phase of the program has not been initiated yet,” said Yu Taisun, Chief manager of LIG Nex 1’s global business. “We are expecting it to be initiated next year. The Agency for Defence Development (ADD) will provide the program requirements and we will be competing with other South Korean defence companies for the contract. The completion date is expected to be 2029.”

“THIS IS THE WEAPON SYSTEM THAT THE COUNTRY NEEDS TO COUNTER NORTH KOREA.”

Taisun is cautiously optimistic about his company’s chances of landing the contract. “LIGNex 1 has been the leading company in the precision guided munition (GM) business area, and I hope this weapon system will be one of them as well. The configuration, the concept of operation and detailed project specifications have not been decided yet.”