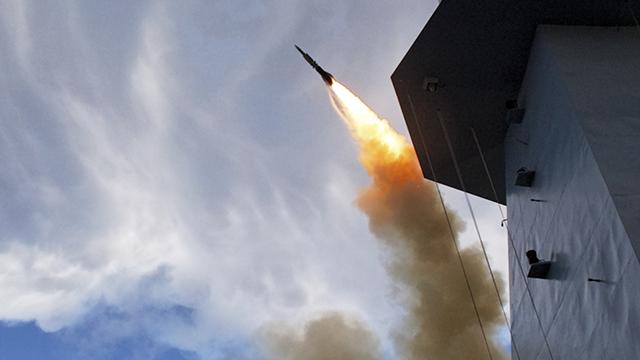 Missile systems developer MBDA is showcasing a wide range of its new products and capabilities at the ongoing DIMDEX 2022, including Marte ER and Exocet MM40 B3, missiles that will be part of the soon-to-be-operational Qatari MCDS (Multilayer Coastal Defence System).

Marte ER, which recently had its final validation, is a state-of-the art anti-surface weapon that had its latest successful firing at the end of 2021. Exocet MM40 B3 is the latest version of the Exocet family and provides advanced performances, thanks to a new seeker and a longer range. Marte ER, which can also be integrated in NH90 Helicopters, can be launched from Coastal Batteries, naval and rotary wings platforms.

The company, which is DIMDEX 2022 Gold Sponsor, is keen on underlining its presence in Qatar and the key role it plays in enhancing the country’s military capabilities. Along with its products that ensure maritime superiority, MBDA is also promoting those that supports the Armed Forces in all their domains – land, air and sea.

At the event, MBDA is also showcasing the Aster B1 NT, the new generation missile for land and naval air defence that will equip the new SAMP/T NG, as well as MMP, which recently had its 1000th delivery to the French Armed Forces. The Aster B1 NT, which is under development and expected to enter service in 2026/27, is an advanced air defence and antiballistic missile with specific enhancements to cope with new threats. It will equip a new generation of naval and land systems, including the SAMP/T NG, whose new developments were contracted to Eurosam (the Franco-Italian consortium belonging to MBDA France, MBDA Italia and Thales) by the French and Italian Armed Forces last year.

The Aster B1 NT can be paired with other MBDA missiles pairs such as the CAMM family of missiles, which includes the new CAMM ER that is under development for naval and ground-based air defence, or the VL MICA family, with its latest member the VL MICA NG. Thanks to the weapons system integration experience of MBDA, either can be combined with Aster to create a single optimal air defence system.

The company’s naval showcase at the show includes the SIMBAD RC system, based on the latest generation of the MISTRAL missile. SIMBAD-RC is a short-range, anti-air and anti-surface self-defence system, particularly efficient against small tactical UAVs. Deploying up to four fire-and-forget MISTRAL missiles, it is designed to provide an autonomous self-defence capability on all kind of warships, or to complement the main air defences of first rank warships.

The MMP, another product that the company is keen on promoting in the Middle East and other regions,  is a 5th generation multipurpose combat system designed not only for dismounted infantry and combat vehicles, but also on board naval platforms for navy commandos and special forces. MMP is in service and has been operationally tested and proven in extremes climatic conditions, including desert and subarctic.

During the show, MBDA is also displaying one of its top products: METEOR, the next generation of Beyond Visual Range Air-to-Air Missile (BVRAAM) system designed to revolutionise air-to-air combat in the 21st century. The weapon brings together six nations with a common need to defeat the threats of today as well as the future emerging ones. Meteor has recently been delivered to Qatar.