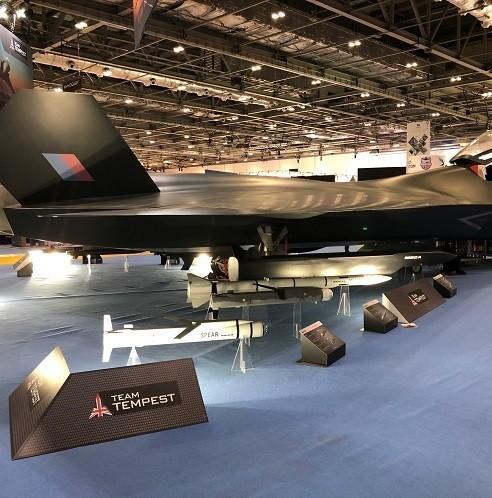 MBDA is showing an insight into some of its ongoing work as the coordinator of effects within Team Tempest, further highlighting the benefits of this new approach to designing a future combat air system.
Being a Team Tempest partner, involved from the inception of a future combat air system, is helping ensure that innovative weapons systems complement the cutting-edge design and the novel technologies of the platform around them.
This collaborative arrangement is already showing the potential to deliver capability enhancements across a range of missions that have led to the concepts on display at DSEI this year.
In the domain of Survivability in Attack and Control of the Air, working closely with Leonardo and BAES has led to MBDA developing concepts for a Hard Kill Defensive Aid System (HK-DAS) capable of tracking, targeting and intercepting incoming missiles in high threat environments.
Leveraging commonality, modularity and reuse of the HK-DAS concept, MBDA are exploring a small form factor, scalable, Ground Attack Micromissile capability to enhance the Tempest system in the Close Air Support (CAS) role for Persistence in Attack.
Drawing upon the prior weapons integration experience of both MBDA and BAES, innovative payload bay and launcher concepts facilitate an improved weapon load out, like the twin WVRAAM (Within Visual Range Air-to-Air Missile) concept, or increased weapon release envelopes and the flexibility to introduce enhanced weapons capability like the increased calibre WVRAAM concept.
Outside of concepts on display, MBDAs contribution to the PYRAMID Open Mission System* is exploiting technologies developed in the Ground Based Air Defence (GBAD) command and control (C2) domain to enhance the operational effectiveness of Tempest in Air-to-Air engagements for Effectiveness in Control of the Air.
There is also work on Intelligence, Surveillance and Reconnaissance (ISR) with Leonardo and BAES where MBDA is working to exploit effectors such as a node on a sensor network, enhancing the situational awareness picture available to pilots.
Whilst next generation missiles previously displayed alongside Tempest – Meteor and the SPEAR family of weapons – will be optimised for use on the future combat air system, by being at the heart of the system design stage is creating a synergistic architecting of effectors and platform, to achieve a significant force multiplication.
Underpinning all of this work is the challenge to processes and technologies, to deliver a step change in the cost, length and complexity of weapon integration.
Chris Allam, managing Director of MBDA UK, said: “The partnership approach provided by Team Tempest will deliver a step change improvement in the time, complexity and cost of weapons system integration campaigns. Being involved in the development of novel interfaces, bay designs and integration processes will also be a key enabler to the spiral development of complementing effectors in the future. We are utilising our unique role in this collaboration to ensure that a future fighter is able to fully utilise existing weapons and planned weapons, whilst supporting a full range of system-design studies assessing the trade space between the future fighter platform and the weapons of the future.”
dsei-2019 / mbda / team-tempest-work /