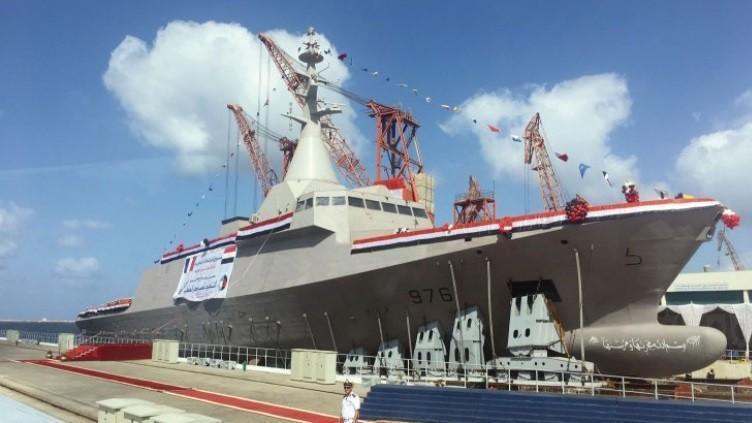 The handover ceremony was held in the presence of the Commander-in-Chief of the Egyptian Navy at Alexandria Shipyard facility. At the event, Vice Admiral Ahmed Khaled Hassan praised the support of the political leadership to “implement a comprehensive strategy to develop and modernize the Egyptian naval fleet to enhance security and stability in the region, and to face the uprising challenges.”

In the field of electronics, the corvette comes with a combat management system “SETIS.” The intuitive man-machine interface and integrated command prompt enables the crew to analyse large amounts of data fed by onboard sensors and allows them to take quick counteractions against a wide range of threats. The onboard sensors and radars include a 3D radar, electronic support measures (ESM) suite, a hull-mounted sonar, a variable depth sonar (VDS) and a fire control system.

The Combat management system is capable of conducting engagement of surface vessels, defence against aerial platforms, detection and tracking, and engagement of submarines.

“Port Said” is equipped with an Italian “OTO Melara 76mm Super Rapido” main front gun, designed for short-range anti-missile point defence, anti-aircraft, anti-surface, and ground support. The gun has a range of 16 km, while its density is 120 shells/minute. The corvette also possesses 16 VLS; surface-to-air missiles are mounted in front of the corvette to launch VL MICA missiles, a short-range, ground-based air defence system deploying the MICA fire-and-forget missile effective against fighters, helicopters and drones. There are 8 “MBDA MM40 Exocet” anti-ship missile launchers on both sides of the frigate.

The rear of the “Gowind” is equipped from both sides with two “Nexter Narwhal 20mm CIWS” artillery designed to hit short-range air and surface targets. Its fire density is 700 rounds/minute, and its range is 2 km. The corvette comes also with two triple torpedo launchers  that are installed in two open and closed ports, on the sides. The warship can fire up to 18 MU90 anti-submarine torpedoes, with a maximum range of 23 km.

The ” Gowind ” corvette also has a landing pad with one heavy helicopter capacity of 10 tons. It also has an indoor hangar with the ability to withstand two fast boats for special forces missions and two unmanned “UAVs” for surveillance and reconnaissance missions.

The induction of the warship is part of a comprehensive strategy pursued by the General Command of the Egyptian Armed Forces to develop and modernize the Egyptian navy fleet in order to face potential regional challenges.

Read the article in Arabic