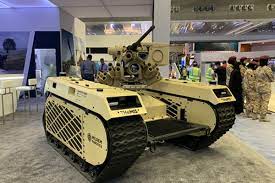 The UGV on display at DIMDEX features the THeMIS platform integrated with the world’s most fielded Remote Weapon System KONGSBERG’s PROTECTOR RS4 with more than 20 000 units delivered and in use around the globe.

The multi-mission THeMIS UGV is in use in 12 countries, including several NATO members such as Estonia, France, Germany, Norway, the UK, and the US. THeMIS Combat systems are being fielded in several countries, the latest delivery was to the Royal Thai Army.

“The THeMIS has been extensively tested in various climates, including 12 months in the harsh conditions of Mali where the system supported soldiers during the French-led anti-insurgency operation Barkhane. This makes the system uniquely qualified for deployment in the armies of the Gulf region that are actively becoming more innovative and looking to benefit from unmanned systems,” said Kuldar Väärsi, CEO of Milrem Robotics.

In Mali, the THeMIS travelled 1200 km in extreme weather conditions and remained operative for more than 330 hours.