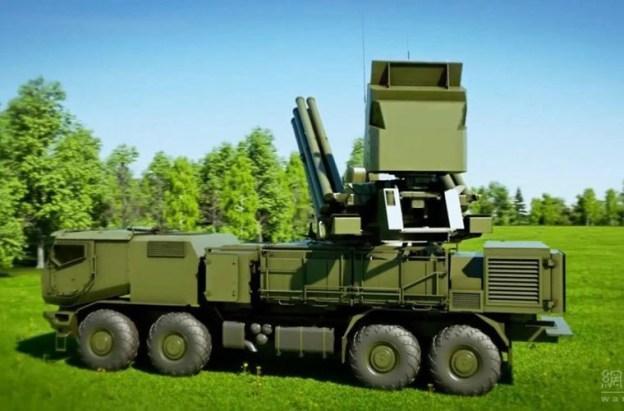 Russia has unveiled the new and lethal Pantsir-SM air defence system, one that is designed to protect civilian and military objects from air attack in any weather, climate and radio-electronic environment, day or night.

The air defence system was revealed for the first time in the military parade that took place in Moscow’s Red Square on June 24, with combat vehicles of the system on a Tornado-K wheeled chassis being presented as part of a mechanized column. Serial production in the near future is unlikely; the development, production and testing of new small-sized missiles for the “Pantsir” would take more than three to four years.

The new “Pantsir-SM” will have longer-range missiles able to detect, track and hit several targets at a greater distance. It will also be able to intercept artillery ammunition, missiles and drones. The system is expected to be more effective against all types of UAVs.

Instead of a standard container for a single anti-aircraft missile, the upgraded Pantsir-SM comes with a cartridge of four smaller diameter missiles is installed in several models of combat vehicles.  The armament of the basic version of the “Pentsir” consists of 12 anti-aircraft guided missiles. The complex is also equipped with two 30 mm quick-firing guns.

According to “Valery Slugin” , chief designer of the air defence system, the ammunition of the “Pantsir SM”, can be increased by installing cartridges in each of the standard launchers of the complex from 12 to 48 missiles. Small-sized missiles will be able to destroy mini-drones at a distance of five to seven km, while the usual “large” armour Pantsir will hit at a distance of 30 km.

Pentsir SM comes in the wake of reports about the difficulties the “Pantsir S1” has had in facing UAVs in Syria. According to Slugin, UAVs were originally one of the types of targets that the “Pentsir S1” was intended to fight against. At the time of the creation of the complex, the drones were quite large and high-speed targets, similar to an aeroplane. With drones becoming smaller and flying at low speeds, they have become harder for radar systems to detect and track.

The destruction of small civilian quadcopters UAVs used for military purposes is difficult for standard air defence systems  not only because such drones are hard to detect. Defeating them with conventional missiles designed for purposes like an aircraft or a cruise missile is not economically practical because of the high cost of ammunition. Pantsir SM increases the ammunition load of one complex when firing at small targets, besides reducing the cost of their destruction.