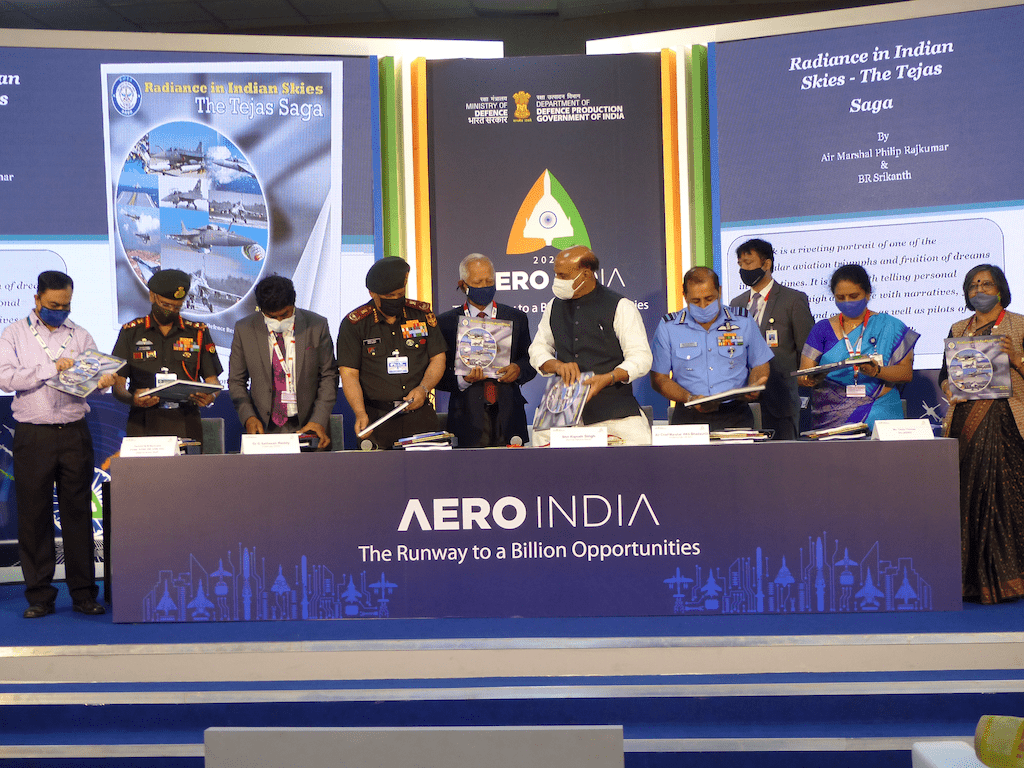 A book commissioned on the Indian Tejas light fighter by the Indian Defence Research & Development Organisation (DRDO) was released during Aero India 2021.

The monograph called ‘Radiance in Indian Skies – The Tejas Saga’ covers the development of the Tejas fighter aircraft which is considered as independent India’s most ambitious aeronautical project.

The book also provides an insight into the unsung role of many of the scientists and test pilots associated with the programme.

The 194 page book charts the mammoth multi-disciplinary effort required to deliver a modern Indian combat aircraft and the revival of Indian fighter aircraft development capability after a 40 year gap, following the design of the HF-24 Marut in the sixties.

The Tejas programme has already resulted in orders for 123 aircraft, development of a naval variant, a follow-on version in the Tejas Mk2 and set the ground for the development of the Advanced Medium Combat Aircraft (AMCA) and a Twin Engine Deck Based Fighter (TEDBF).

‘Radiance in Indian Skies – The Tejas Saga’ is authored by Air Marshal Phillip Rajkumar (Retd) who was the first project director (Flight Test) of the LCA project under the Aeronautical Development Agency (ADA). He spent nine years in the programme from 1994 to 2003 was instrumental in setting up the National Flight Test Centre (NFTC) in 1994, which has since performed 5,000 protoype test flights safely. His co-author BR Srikanth is a well known writer on technology matters for over two decades, who has also co-authored an earlier DRDO monograph ‘The Incredible Journey of the Indian AWACS’ along with Dr K. Ramchand and S Krishnaswamy.