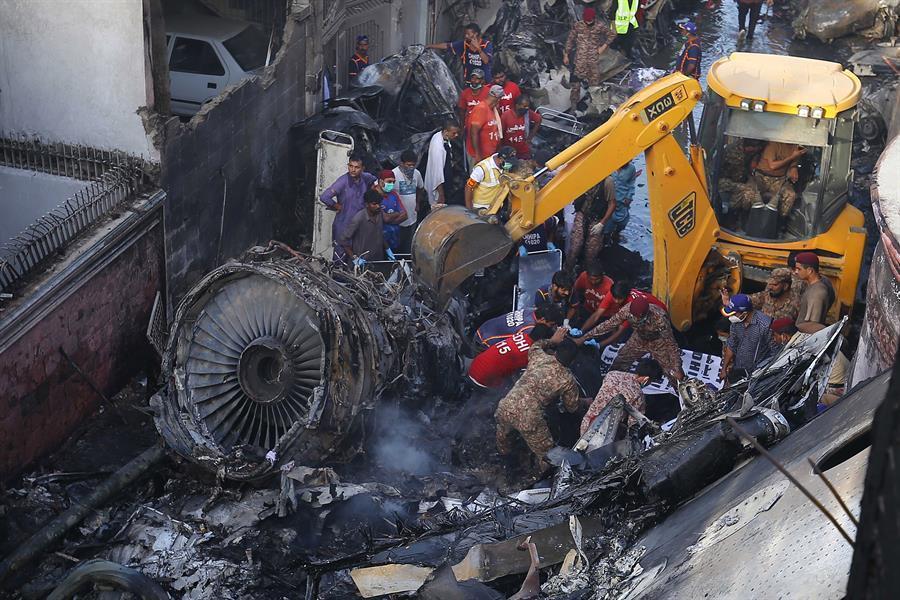 The flight data recorder and cockpit voice recorder have been recovered from the site of a plane crash that killed at least 97 passengers and crew members in the Pakistani city of Karachi.

A Pakistan International Airlines (PIA) passenger plane flying from Lahore has crashed into a residential area of Karachi, killing at least 76 people.

The pilots of flight PK8303, an Airbus A320 carrying 91 passengers and eight crew, were attempting to land at the city’s Jinnah International Airport.

The plane had attempted one landing but as it went round again lost its engines and issued a mayday call.

“The black box had been found late yesterday, we are handing it over to the inquiry board,” Al Jazeera quoted a PIA spokesman Abdullah Khan who said both the flight data recorder and cockpit voice recorder were located.

“After it hit and I regained consciousness, I saw fire everywhere and no one was visible,” passenger Mohammad Zubair, 24, said from his hospital bed in a video clip circulated on social media.

“The cries were everywhere and everybody was trying to survive. I undid my seat belt and I saw some light and tried to walk towards it. Then I jumped out.”

Zubair suffered burns but was in a stable condition, a health ministry official said. The airline named the other survivor as the president of the Bank of Punjab, Zafar Masud.

Pakistani investigators are trying to find out if the crash of the national flag carrier’s flight PK-8303 is attributable to a pilot error or a technical glitch, with new leads raising fresh questions over the circumstances of the incident, Geo News reported.

According to the report, prepared by the country’s Civil Aviation Authority (CAA), the Airbus A-320’s engines had scraped the runway thrice on the pilot’s first attempt to land, causing friction and sparks recorded by the experts.