Plane Breaks Apart after Skidding Off Runway in Turkey 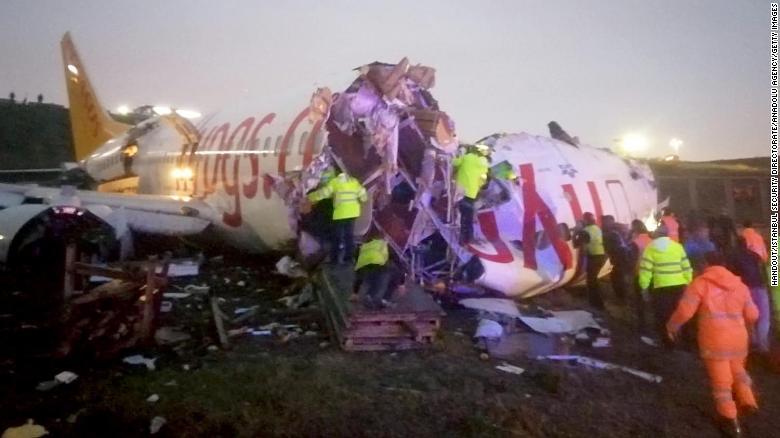 The plane was arriving from the western Turkish city of Izmir with 183 on board, including 175 adult passengers, two young children and six crew members. Passengers had to evacuate through cracks in the smashed plane and have been sent to different hospitals.

Istanbul Gov. Ali Yerlikaya said the plane landed in bad weather, failed to “hold onto the runway” and skidded some 50-60 meters (yards) before crashing into a ditch from a height of some 30 meters.

“We are deeply saddened … (But) we are very happy that we escaped a greater accident,” he said, adding that the plane could have burst into flames.

Around 22 of the injured went to Kartal Lutfi Kirdar Training and Research Hospital. Many of them are suffering from injuries to their heads and legs, said chief surgeon Recep Demirhan.
He said that 14 of those passengers are suffering “middle range” injuries and eight are lightly injured. “There are broken bones in different places in their bodies,” Demirhan said.
He said that among their patients, two “kids are injured and three foreigners are injured,” without stating their nationalities.

The airport was shut down after the incident, which occurred at around 6:30 p.m. local time, and flights were being diverted to Istanbul’s main airport.

An investigation into the incidence has been launched.