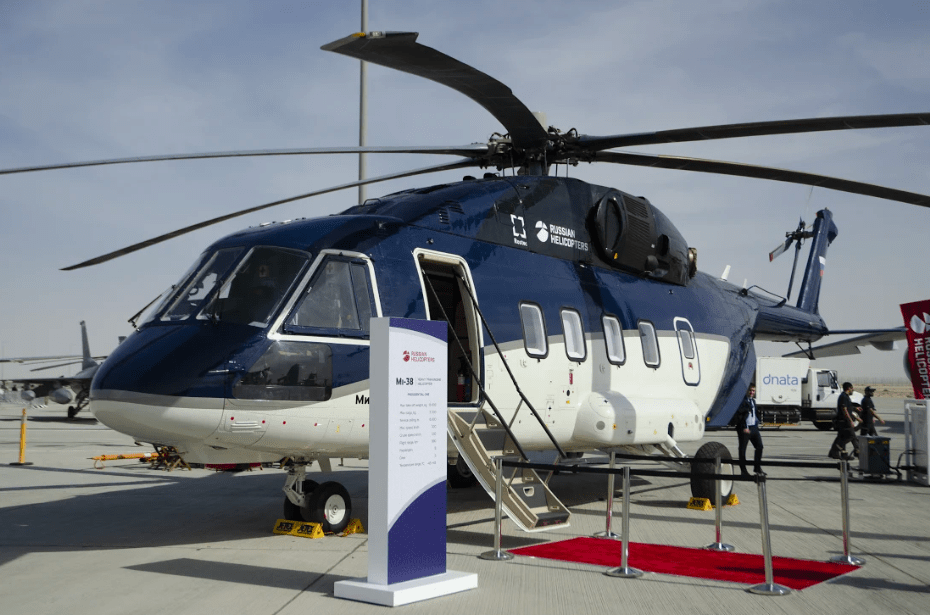 The helicopter, built by Kazan Helicopters, will be operated by Russian Helicopter Systems (RHS).

“The newest Mi-38 is a multi-purpose helicopter that will fill the empty niche between medium Mi-8 and heavy Mi-26 models. It can be used for transportation of cargo and passengers, search and rescue operations, and as a flying hospital or an offshore helicopter for delivering specialists to oil production platforms at sea. The first serial produced machine will be used for business class transportation. We have already demonstrated this helicopter with highly comfortable cabin to the leaders of Russia and foreign countries. The superior flight performance characteristics and competitive price will guarantee that Mi-38 will find its place in the helicopter fleet of Russia, our partners in the Middle East, Southeast Asia, Latin America and other regions,” said the Industrial Director of Rostec Aviation Cluster Anatoly Serdyukov.

“The delivery of the first serial Mi-38 is an important step, confirming that Kazan Helicopters is ready to serial delivery of this type of machine for both commercial operators and governments. The demand forecast of potential buyers for Mi-38 by 2030 is more than 100 aircraft,” said the Director General of Russian Helicopters Andrei Boginsky.

The Director General of Kazan Helicopters Yuri Pustovgarov handed a symbolic key to the new Mi-38 helicopter to the CEO of RHS Mikhail Kazachkov. The helicopter with a highly comfortable cabin is designed to carry up to 10 people.

The first serial Mi-38 helicopter was introduced to the general public at MAKS-2019 Moscow Air Show, where it was demonstrated to the President of Russia Vladimir Putin and the President of Turkey Tayyip Recep Erdoğan. Mi-38’s foreign debut took place during the Dubai Airshow 2019, where the head of the Russian Ministry of Industry and Trade Denis Manturov showed it to the Crown Prince of the Emirate of Abu Dhabi, Sheikh Mohammed bin Zayed Al Nahyan.

“We are glad to continue our cooperation with Russian Helicopters and implement another deal – financing the production of Mi-38 in the framework of the previously signed cooperation agreement. Renovation of aircraft fleets requires high capital investments, and leasing allows you to divide the cost of expensive asset acquisitions into long periods comparable with the life of the asset, making it undoubtedly an effective financial tool in solving such problems. Together with Gazprombank, we see good prospects for leasing aircraft and, in particular, helicopters. We have the capability and resources to finance the renewal of fleets of both commercial and federal subjects in the Russian Federation,” commented the CEO of Gazprombank Leasing Maxim Agadzhanov.

During the ceremony, employees of Kazan Helicopters were awarded for their active participation in the production of Mi-38 and a significant contribution to the development of domestic helicopter construction. Employees of the enterprise were awarded the title of Honored Mechanical Engineers of the Republic of Tatarstan, and also received honorary diplomas of the Ministry of Industry and Trade of the Russian Federation, Rostec State Corporation and Russian Helicopters Holding Company.
The design of Mi-38 consists of a single-rotor scheme and a twin-engine power plant with high power and economic performance. The main structural elements of the fuselage are made of aluminum alloys, individual components and parts are made of steel, titanium and composite materials. The helicopter uses two Russian-made TV7-117V engines, equipped with dust protection devices with a high degree of air purification. An advanced six-blade rotor provides high thrust and low vibration levels. The blades are equipped with an anti-icing system, and the X-shaped tail rotor gives the helicopter excellent handling with low noise level.

Mi-38 is equipped with a modern navigation system and satellite navigation system. The cockpit of the helicopter is equipped with five versatile LCD color screens to ensure the effective display of information. The flight range of the new helicopter is up to 1,200 kilometers (with additional fuel tanks). With its maximum takeoff weight of 15.6 tonnes, the helicopter can carry 5 tonnes of payload on board or on an external sling.