Russia Expects to Induct 2S38 Into Service in 2021 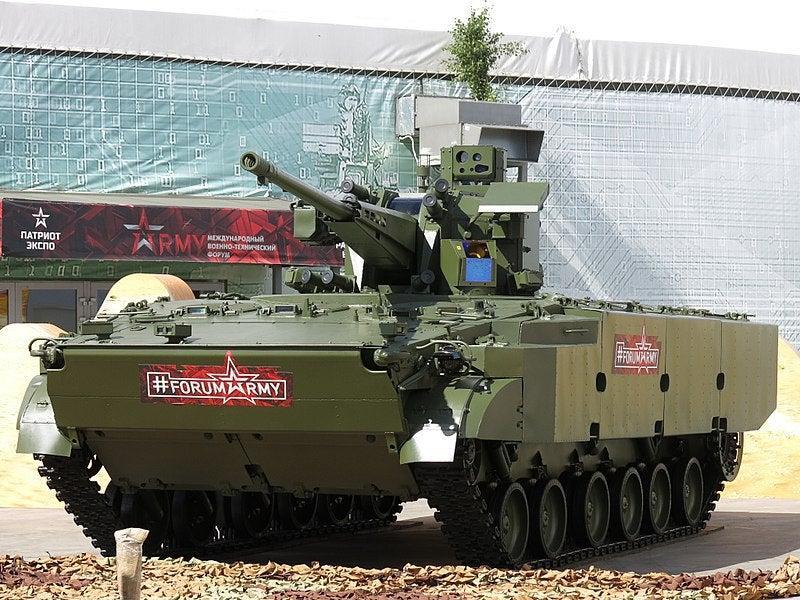 The 2S38 Derivatsiya PVO, the new Russian combat vehicle, is  expected to enter into service by early 2021.

A column of 2S38 vehicles participated for the first time in the military parade that took place in Moscow’s Red Square on June 24.  The preparation and acceptance trials of two prototypes of the 2S38 will be completed by December this year. Acceptance trials and final revision are expected in early 2021, after which it will be officially adopted.

The 2S38 combat vehicle is carried on a BMP-3 infantry fighting vehicle chassis. It is fitted with a remotely-controlled weapon station, armed with a single 57 mm barrel. Such an arrangement is rather unusual for a vehicle of this class. The “Pantsir” and “Tunguska” air defence systems currently in service are equipped with 30 mm barrels.

In addition to the main gun, the anti-aircraft gun has a 7.62-mm PKTM machine gun with ammunition of 500 rounds, which can be used against infantry. To quickly reload weapons directly on the battlefield, a 9T260 ammunition resupply vehicle transport-loading vehicle was associated, which can deliver several ammunitions at once.

According to Viktor Murakhovsky,  Editor-in-Chief of “Arsenal of the Fatherland” magazine, the “Derivatsiya” is needed in the regiments and brigades of the Ground Forces.  The 2S38 will create a primary air defence unit that directly covers the ground forces from airstrikes. The function is currently covered by the “Tunguska” anti-aircraft weapon armed with gun and missile system, but despite modernization, Tunguska does not meet all the necessary modern requirements for the reach and effectiveness of hitting targets, especially small ones.

Small drones can inflict major damages, as the Syrian experience has proved,  said  Murakhovsky.  Intercepting them with sophisticated antiaircraft missiles is achievable,  but they are several times more expensive than the drones. “The “Derivatsiya” will help solve this problem” he added. “The used shells are affordable as well as highly effective in intercepting the drones. There is also the possibility of installing electronic devices and controls in the shells.”

The 2S38 is also effective against ground targets, vehicles, and infantry holed-up in buildings and field fortifications. The shells of the Derivatsiya-PVO can hit targets at an altitude of up to 4.5 km and a range of 6 km. This is 50% higher than the capabilities of current small-calibre anti-aircraft available weapons. The 57 mm gun can easily defeat most modern armoured personnel carriers, infantry fighting vehicles, self-propelled artillery systems and other light armoured vehicles. However, with a rate of fire of 120 rounds per minute, the vehicle has a limited ammunition load of only 148 rounds.

“Derivatsiya” has passive detection and tracking systems. It possesses a modern optoelectronic guidance and reconnaissance system with the help of its thermal imaging rather than radar to detect and track air targets. The 2S38 vehicle can effectively detect targets in difficult conditions while remaining invisible to the enemy.

The calibre and size of the projectile, which has increased in comparison to other self-propelled anti-aircraft guns, makes the creation of a new “smart” ammunition, which can be programmed to detonate at a specific point in the path to create a fragmented field, possible.  A specialized guided projectile is also being developed, capable of manoeuvring and pointing after a shot. Such innovations are designed to combat UAVs and enemy-controlled weapons.