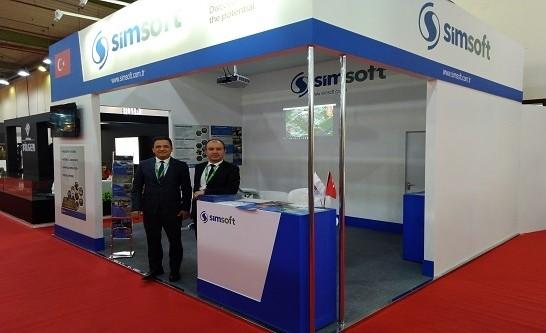 The company, set up in 2006, has grown considerably and has been, in recent years, looking to expand its global footprint. Operating under four main groups: Simulators, Defense & Aerospace Systems, Visual Systems, and Gaming & Simulation, Simsoft has its head office in Ankara and also has offices in other regions of Turkey as well as Florida. According to a company official, Asia and the Middle East are two areas with immense market potential.

“We have customers in different regions,” he said. “We have sold BTR-80 armoured personnel carriers (APC) vehicle simulators to the Bangladesh Army, a bus simulator for Mecca transit to the UAE, and war games simulators for Turkmenistan. Holland is also one of our customers. We have delivered simulation systems to facilitate maintenance of F-16 aircraft as well. Our customers are very satisfied by the quality of our products and support our claim that they are very close to life.”

Among the products that the company is showcasing at the event is combat simulator system that uses virtual reality. “We have developed the product based on the need expressed by a customer in Turkey. The system will be out in the market within a few months. Simulators are very important for a sector like defence, because the risks involved in using complicated equipment is very high.”

“WE ARE TRYING TO PUT SOMETHING NEW IN THE MARKET AS THE COMPETITION IS VERY TOUGH,” the official added.

“WE ARE WORKING ONLY ON TECHNOLOGY AND ARE NOT A SYSTEMS INTEGRATOR. HOWEVER, WE ARE WORKING WITH CONSTRUCTION COMPANIES THAT MAKE SIMULATION CENTERS.”