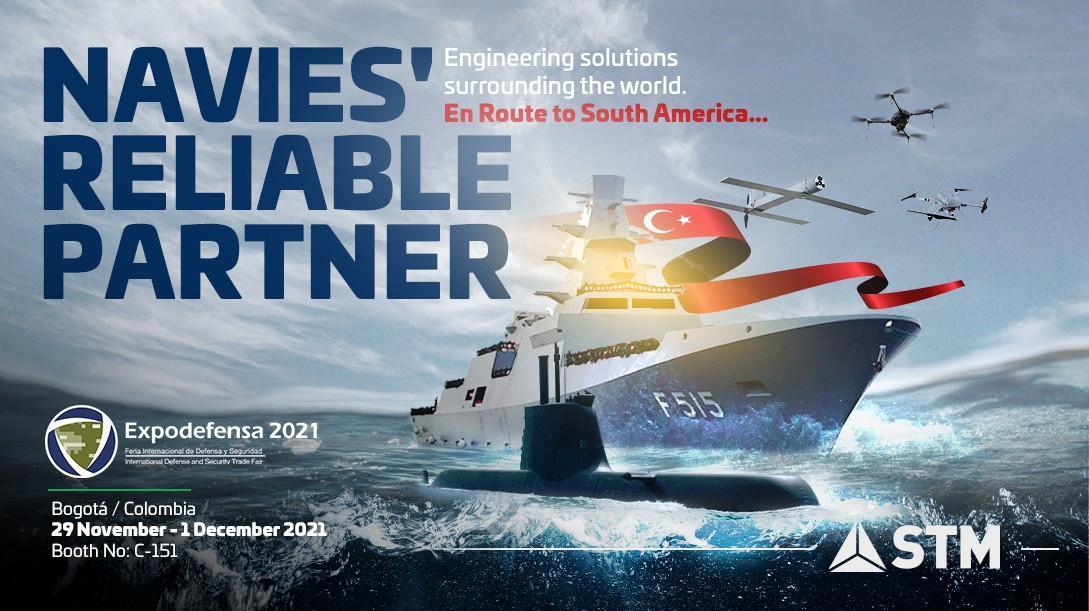 Turkish defence firm STM, which supplies the Turkish Armed Forces as well as the navies of friendly and allied nations with state-of-the-art warships, is presenting its military naval platforms and tactical mini-UAV systems at Expodefensa 2021 fair in Colombia.

At the event, the company is exhibiting the capabilities of the CF3500 Frigate, the I-Class Frigate built for the Colombian Navy that is based on MiLGEM, and its tactical mini UAV systems ALPAGU, KARGU and TOGAN.

According to the company, there has been surge in interest from South America for its corvette and frigate projects. In addition to the Offshore Patrol Ship (OPV, designed for surface defence warfare, effective uninterrupted reconnaissance, surveillance and patrol missions on the high seas and in coastal waters, South American countries are also keeping a close eye on the MiLGEM Ada Class Corvette and I-Class Frigate.

Under the leadership of the Presidency of Defence Industries (SSB), STM has signed deals with more than 20 friendly and allied nations, from South America to the Far East, for collaborations, technology transfer and business development activities.

STM has begun the construction of a Corvette for the Ukrainian Navy and has already built and delivered the Pakistan Fleet Tanker PNS MOAWIN in Karachi. The company, which is the main contractor in the modernisation project for Pakistan’s Agosta 90B Khalid-Class submarines, is also currently involved in the construction of four Ada-Class Corvettes to be built by Turkey for Pakistan.

The Turkish Naval Forces are making active use of the four MiLGEM Ada-Class Corvettes under a project in which STM was the main subcontractor and undertook various crucial tasks. STM has designed and is the main contractor of TCG ISTANBUL, Turkey’s first national frigate, and is continuing in its efforts to deliver the ship in 2023 with an indigenisation rate of at least 75 percent.

A leading player in the field of tactical mini UAV development, STM’s product range consists of Fixed-Wing Autonomous Tactical Attack UAV System ALPAGU, Rotary-Wing Attack UAV System KARGU and Autonomous Multi-Rotor Reconnaissance UAV System TOGAN. KARGU, which has been in TAF’s inventory since 2018, achieved its first export this year. The 1.9 kg ALPAGU, which can be carried by a single soldier and fired from a launcher, has passed its firing tests and is set to enter the Turkish Armed Forces inventory in the coming weeks.