Taiwan Lowers the Risk of Fighter Acquisition with F-16V

In favoring Lockheed Martin’s F-16-Block70 model and its avionic package, Taiwan has avoided the hardship experienced in past bespoke upgrades.

With the recent order for 66 F-16-Block-70 aircraft and upgrading of an additional 142 to the same level, The Republic of China Air Force (ROCAF) plays a significant role in the global F-16 program. Taipei joins other international buyers with the acquisition, obtaining an advanced, standardized, and competitively supported program with cutting-edge capabilities for decades.

By 2026, ROCAF will become the largest operator of the most advanced F-16s outside the USA. According to Danya Trent, Vice President F-16 for Lockheed Martin, the company has selected the latest, most advanced avionics to support F-16 pilots with this cutting-edge technology, enabling their critical missions worldwide.

Lockheed Martin has grouped these systems into the newest F-16-Block-70 configuration. The model has won customers’ confidence in tens of billions of dollars worth of orders for over 120 jet fighters. The standardization provides an avionic baseline that simplifies procurement and manufacturing, reduces sustainment costs, and ensures equipment and capabilities are always at their peak. 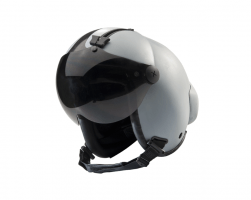 The JHMCS II helmet display is an example of the new standard; it was created specifically for aircraft like the F-16V and built on the legacy of the based on battle-tested JHMCS variants used on F-15, F-16, and F-18.

“The flight tests were a milestone as we partner with CEVS on the JHMCS II, and we look forward to continued collaboration,” Ms. Trent added. US-based CEVS is the developer and manufacturer of the Joint Helmet Mounted Cueing System II (JHMCS II).

Fully integrated with the cockpit of the F-16, JHMCS II uses a color display and is fully adaptable for day and night flights. According to Lockheed Martin, the color symbology increases the pilot’s immediate recognition of the friendly, threat, and unknown targets. The system uses a new hybrid optical inertial tracking to determine the pilot’s line of sight accurately, using a helmet-mounted tracking unit, a reference unit on the dashboard, and new tracking algorithms. The JHMCS II is the only Helmet Mounted Display (HMD) integrated and tested on the F-16-Block-70.

JHMCS II displays aircraft performance and weapons employment data on the pilot’s visor, providing a significant increase in situational awareness. It enables the pilot to aim weapons and sensors by merely turning his or her head. In critical air combat phases, pilots can accomplish weapon aiming and employment full heads-up and not need to divert their attention to the cockpit displays to obtain needed data. The system supports growth options for the pilot health monitoring and G-LOC detection and warning.

Equipped with the most advanced systems and avionics package, the F-16 Block-70 brings the best performance while lowering the risk associated with past upgrades. The acquisition enables ROCAF fighter pilots to maximize their capabilities.