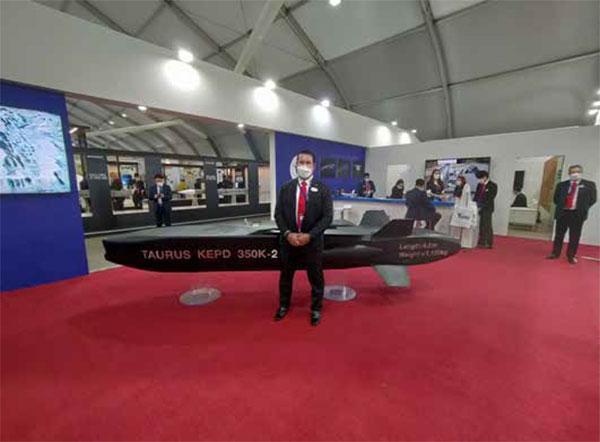 Taurus Systems is currently working on modifying the Taurus KEPD350K missile to into a smaller and lighter penetrating cruise missile, Taurus KEPD 350K-2. The lighter and smaller missile will be no less powerful than the original version and is intended to be used on the Republic of Korea Air Force‘s FA-50 aircraft.

The company, which has showcased the prototype of the missile at IDEX 2021, expects to complete development in 36 months, said Christoffer Drevstad, President of Taurus Systems Korea.

“This is our response to Korea’s need for a standoff weapon for the FA-50. The aircraft cannot carry the original Taurus missile as it is too long. We also hope that Taurus KEPD 350K-2 will be selected as the missile for the KF-21 fighter jet.” – Christoffer Drevstad

The Taurus KEPD 350K-2 will have one fuel tank shorter than the original Taurus 350K.

“We are taking one fuel tank off to make it lighter, but there will be no difference in terms of performance. It will have the same avionics and the same structure inside. Being a smaller version, it can be integrated into more platforms easier.” – Christoffer Drevstad

While the missile primarily targets the need of the ROKAF, Taurus will seek export opportunities, said Drevstad.

“The survivability of the missile has been improved by robust low altitude capabilities. The blast and fragmentation functionality and the Programmable Intelligent Multi-Purpose Fuse enables the destruction of wider and deeper targets.” – Christoffer Drevstad

The KEPD 350-K2 will fit right into the arsenal of militaries that already have the KEPD 350 Km.

“It is important to note that all the logistics and infrastructure they have for the original version will fit for the smaller version of the missile as well. The interface, test equipment and fueling equipment; everything is the same.” – Christoffer Drevstad