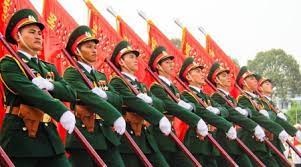 The development of Vietnam’s indigenous defence industry is gaining pace.

An unmanned ground vehicle (UGV) – ‘Viet Nam Robot CBRN’ and multirotor unmanned aerial vehicles (UAVs) – ‘Airborne Radioactivity Monitoring System UAV,’ both developed by the Vietnamese Academy of Military Science and Technology (AMST), are now being operated by the People’s Army of Vietnam. The systems are being used as part of the operations of two of the service’s chemical, biological, radiological and nuclear (CBRN) defence units.

The UGV weighs 115 kg, has six wheels, and is equipped with a manipulator arm capable of lifting weights of up to 23 kg. It is capable of being used for a variety of missions and features an interchangable gripper attachment. Two video cameras, located on the UGV’s main body and manipulator arm, give the vehicle situatonal awareness.

The introduction of the two systems by the service is a shot in the arm for the local defence industry that is keen on playing a major role in the country’s military modernization efforts. The country is currently also trying to diversify its arms supplier base, thus reducing its dependance on Russia.