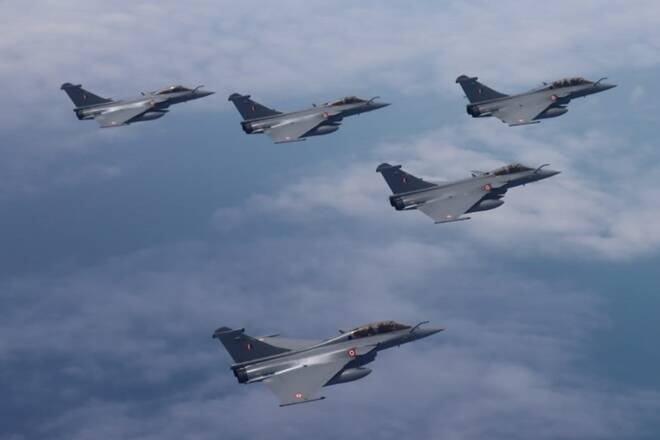 The United Arab Emirates has placed an order for 80 Rafale fighter jets and 12 military helicopters.

The contract, worth 17 billion euros (US$19.20 billion and the largest ever overseas sale of the warplane, was signed during French President Emmanuel Macron’s visit to UAE on Friday.

The French presidency said the deal was signed at a ceremony between Abu Dhabi Crown Prince Sheikh Mohammed bin Zayed al-Nahyan (MBZ) and Macron on the sidelines of the Dubai Expo.

The Rafale F4, for which the Emirates Air Force will be the first user outside France, will provide the Emirates armed forces with a tool capable of guaranteeing sovereignty and operational independence. The contract is the result of total mobilization by Dassault Aviation alongside the Emirates Air Force and comes on the back of a more than 45-year long relationship of trust between the United Arab Emirates and the company, built on the Mirage family of fighter aircraft, notably the Mirage 2000-9, the modernization of which began two years ago.

“The sale of 80 Rafale to the UAE Federation is a French success story: I am very proud and very happy as a result,” said Eric Trappier, Chairman and CEO of Dassault Aviation. “I wish to thank the authorities of the Emirates for their renewed confidence in our aircraft. After the Mirage 5 and Mirage 2000, this Rafale contract consolidates the strategic relationship that binds our two countries and the satisfaction of the Emirates Air Force, a long-standing and demanding partner of our company. I wish to underline the quality and effectiveness of the relationship between the French authorities and industry, which contributed to this success by team France.”

The UAE contract, which follows deals in Greece, Egypt and Croatia this year, would lead to an increase of the monthly Rafale production. The French presidency said that, in addition to the jets, the UAE had also agreed to buy 12 Caracal military transport helicopters from Airbus.

“This is an outcome of the strategic partnership between the two countries, consolidating their capacity to act together for their autonomy and security,” the Elysee said in a statement.

There have been on-off negotiations for the Rafale fighter jets between the UAE and its French suppliers for more than a decade.