US Okays Sale of 8 MV-22 Osprey to Indonesia 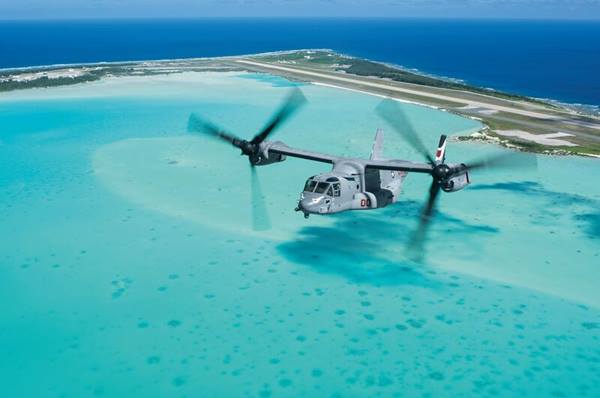 Indonesia will soon acquire eight MV-22 Block C Osprey tiltrotor aircraft and related equipment from the U.S. at an estimated cost of US$2 billion.
The State Department has made a determination approving the possible Foreign Military Sale to the Government of Indonesia. The Defense Security Cooperation Agency delivered the required certification notifying Congress of this possible sale on July 6.

The Bell Boeing V-22 Osprey is a joint-service, multirole combat aircraft that uses tiltrotor technology to combine the vertical performance of a helicopter with the speed and range of a fixed-wing aircraft. With its nacelles and rotors in vertical position, it can take off, land and hover like a helicopter. Once airborne, its nacelles can be rotated to transition the aircraft to a turboprop airplane capable of high-speed, high-altitude flight.

“The proposed sale of aircraft and support will enhance Indonesia’s humanitarian and disaster relief capabilities and support amphibious operations. This sale will promote burden sharing and interoperability with U.S. Forces,” a State Department official informs.

The prime contractors of the aircraft will be Bell Textron Inc., Amarillo, Texas and the Boeing Company, Ridley Park, Pennsylvania.

There are no known offset agreements proposed in connection with this potential sale.

The V-22 Osprey has been continuously deployed since entering service in 2007 with the United States Marine Corps (USMC) and the Air Force Special Operations Command (AFSOC) in 2009. The aircraft has seen extensive action in Afghanistan as part of Operation Enduring Freedom, in Iraq as part of Operation Iraqi Freedom, and as part of a U.S. Central Command (USCENTCOM) Special Purpose Marine Air Ground Task Force (SPMAGTF) supporting a long-range rapid reaction/crisis response force.