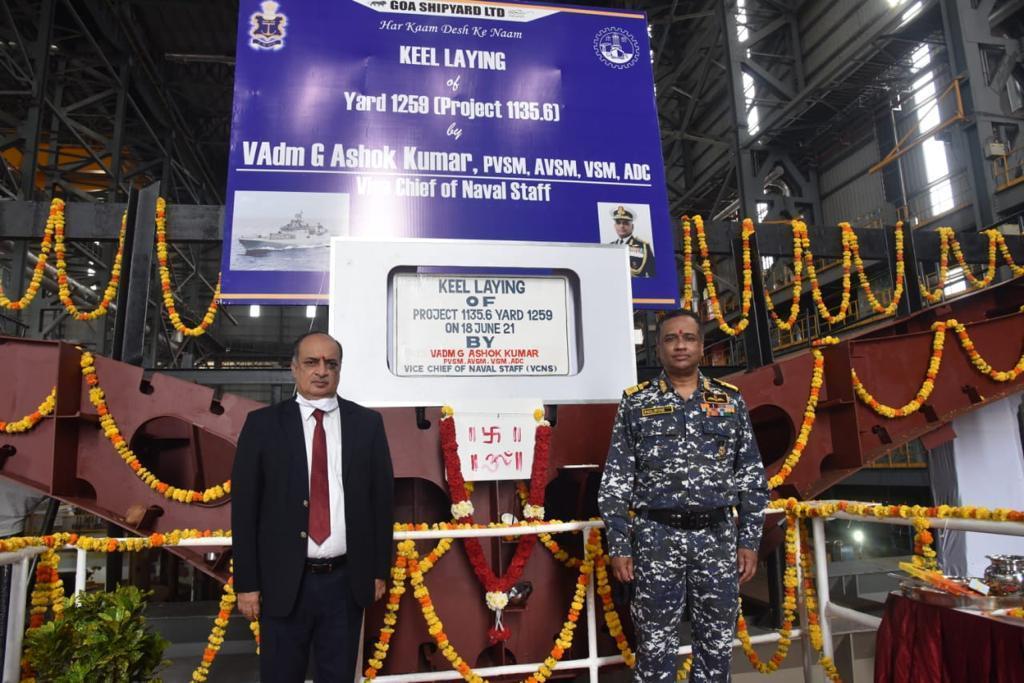 The Keel laying of the second frigate of the Indian Navy’s follow-on ship of the Project 1135.6 Class has taken place.  The Keel for the first ship was laid on 29 Jan 2021.

The scheduled delivery date for the first Indian built Project 1135.6 Class Frigate is June 2026, followed by the delivery of the 2nd Frigate in December 2026.

The new warships under construction at Goa Shipyard Ltd (GSL) are part of an indigenous shipbuilding program being executed under an Inter Governmental Agreement with Russia for construction of two advanced frigates. The contract was signed in January 2019 between the Ministry of Defence and Goa Shipyard Limited (GSL).

This is the first time that warships of such technological complexity are being constructed indigenously at GSL.

A large number of major equipment is also being substituted with indigenous equivalents such as sonar systems, BrahMos supersonic cruise missile, Combat Management System, in addition to use of significant indigenous build material.

Advanced features of stealth include a special hull design, to limit radar cross-section, low electromagnetic, infrared and under water noise signatures. The ships would carry highly sophisticated and state-of-art weapon systems and sensors. The entire hull of the warships is being built with indigenous steel.

The Follow-on P 1135.6 series of frigates are customised to meet the Indian Navy’s specific requirements.

The new frigates are potent platforms, with a mission span covering the entire spectrum of Naval warfare; Air, Surface and Sub-surface.

The ships would be equipped to operate in littoral and blue waters; both as a single unit and as consorts of a naval task force.

To support these ships through their life cycle, the Indian Navy is putting in place the requisite infrastructure for training and maintenance.