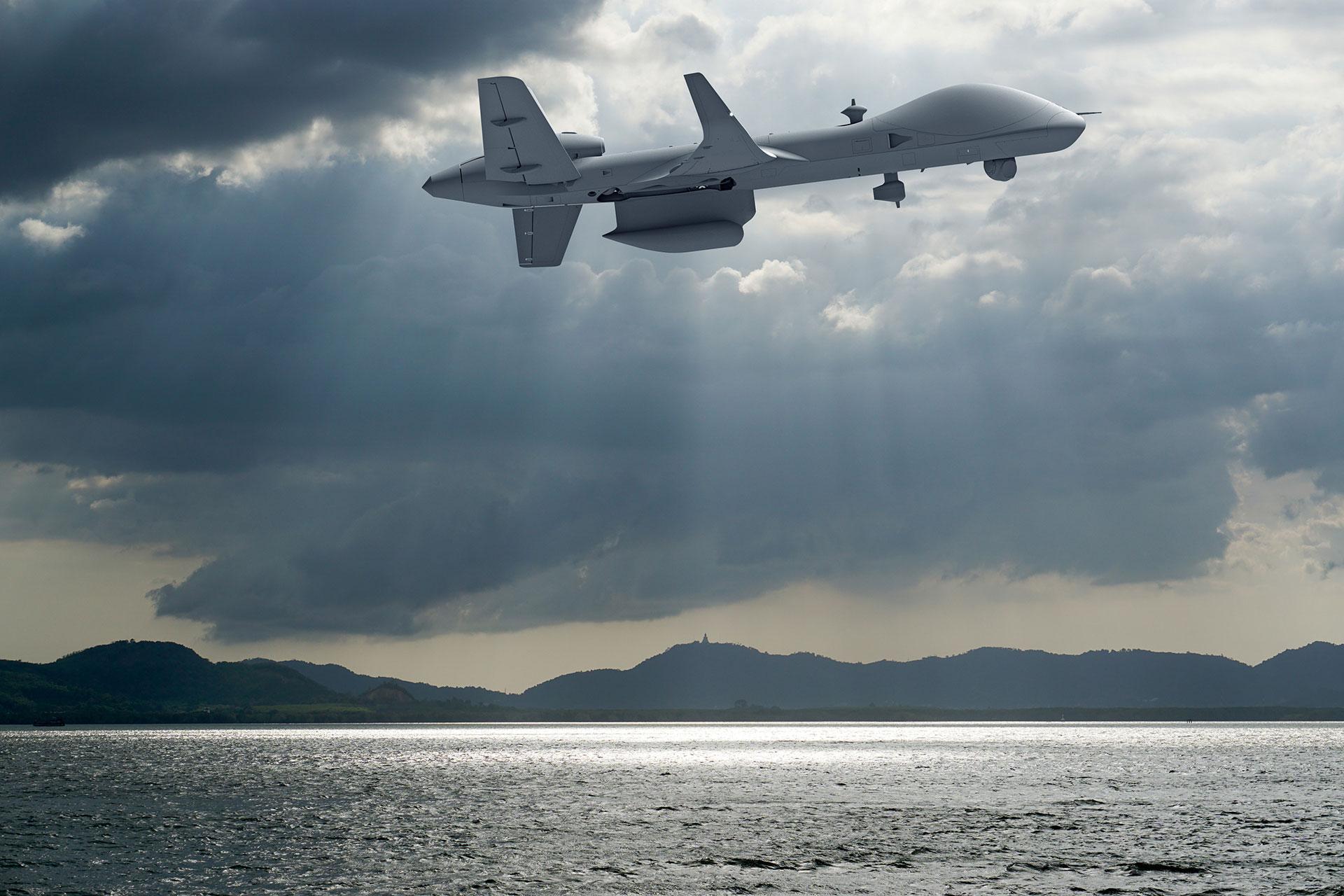 With militaries in Southeast Asia and the Asia Pacific focusing more than ever on maritime domain awareness, interest in the multi-mission MQ-9B SeaGuardian, manufactured by General Atomics Aeronautical Systems (GA-ASI), has soared.

The California-based company is showcasing the various capabilities of the Remotely Piloted Aircraft System (RPAS) at the ongoing Singapore Airshow. A ground-up redesign of earlier variants, the MQ-9B – the SeaGuardian and the land-based SkyGuardian – is the only Unmanned Aircraft System (UAS) with the capability to operate in unsegregated airspace. The nine external hardpoints of the aircraft enable it to be used for a wide variety of critical missions, including maritime domain awareness, search and rescue, military surveillance patrol as well as environmental protection.

The SeaGuardian, which has SATCOM Auto Take-off and Landing system that helps minimize the aircraft’s launch and recovery footprint, also has a maximum endurance of 40 hours and in excess of 5400 NM range in full mission configuration. The unmanned aircraft also has anti-ice, de-ice and lightening protection capabilities to minimize lost sorties due to tropical weather. The RPAS also has a fully certifiable design, including for the Ground Control Station. This, combined with a Detect and Avoid (DAA) system, offers the potential to operate the MQ-9B in all classes of airspace.

Capable of operating at Beyond Line of Sight (BLOS) ranges at altitudes over 40,000 feet and in inclement weather conditions, the MQ-9B can also provide EO/IR Full Motion Video (FMV), Synthetic Aperture Radar (SAR) imagery, and Ground Moving Target Indicator (GMTI) data about potential threats to military commanders in real-time from stand-off ranges without harm to the aircrew.

In the maritime role, the platform is equipped with a multi-mode maritime search radar, an Inverse Synthetic Aperture Radar (ISAR) capability, and an Automatic Identification System (AIS) detection capability and ESM that provides a true Maritime Wide Area Search (MWAS) and allows for the identification and interdiction of maritime targets. The maritime radar on the UAS can support open-ocean and littoral surface surveillance for border patrol, coast guard, and disaster relief missions.

One of the advantages of the SeaGuardian is its ability to complement traditional manned maritime patrol aircraft (MPA). According to company officials, the SeaGuardian presents a far more cost-effective solution for militaries than a manned aircraft as its operating and support costs are considerably lower. The UAS can also be used to complement a manned MPA, and will undertake the dull, dirty and dangerous roles. This not only keeps aircrew away from risk but also allows the MPA to be retained for focused tasks. Enhancing its appeal is the fact that the SeaGuardian also can seamlessly share information with other platforms, including the MPA.

One challenge for the company is the Missile Technology Control Regime (MTCR), which limits the United States and other signatories from exporting high-end UAVs to Southeast Asia as no country in the region has signed the treaty. Tommy Dunehew, Vice President of International Strategic Development for GA-ASI, says the U.S. Administration’s new Unmanned Aerial Systems (UAS) export policy would ultimately expand the list of countries authorized to receive UAS. “This will allow us to compete on a more even basis with countries like China. We remain confident that our systems are far more capable and cost-effective than those of our competitors,” he adds.

The SeaGuardian has already caught the eye of militaries in the region. Discussions between India and the US on the potential sale of the armed version of the SeaGuardian RPAS are progressing at a fast clip, with a decision likely in the next few months. The Indian Army and the Air Force are also said to be interested in acquiring the MQ-9B. The Royal Malaysian Air Force (RMAF), which plans to acquire six medium-altitude long-endurance (MALE) unmanned aerial vehicles (UAV), is also said to be considering the SeaGuardian.

The SkyGuardian also has received an enthusiastic response from militaries. The British Royal Air Force has selected the RPAS and is expected to receive the first if its Protector drones in 2024. Late in 2019, the Australian Defence Force selected the MQ-9B SkyGuardian under Project Air 7003. In March last year, the U.S. Government approved the sale of four Skyguardian to Belgium.