Home- Stories -Training at the Top

Training at the Top 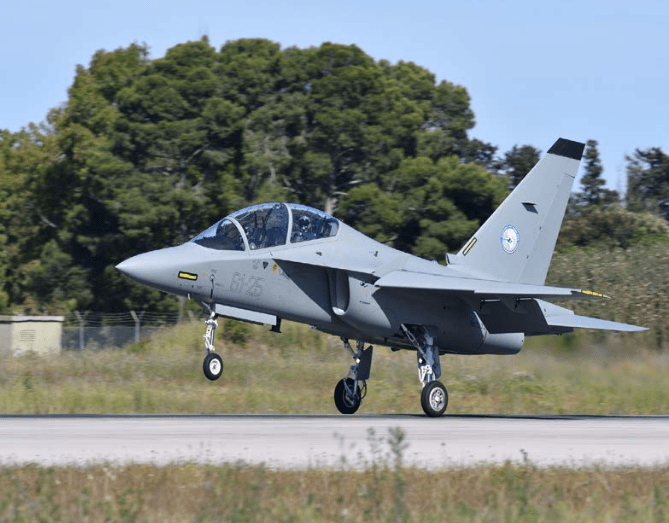 Leonardo delivered the final M-346 to the International Flight Training School (IFTS) at Lecce-Galatina, an Italian Air Force air- base in south-eastern Italy on October 30, 2019. In total, four aircraft have been added to the already existing fleet of 18 T-346As (the designation of the M-346 in Italian Air Force service) to increase the advanced lead-in to fighter training capability.

The joint initiative between Leonardo and the Italian Air Force to launch the IFTS was announced on July 17, 2018 at the Farnborough International Airshow in the UK. The agreement was inked by the-then Italian Air Force Chief of Staff, Lt. Gen. Enzo Vecciarelli and Leonardo’s CEO Alessandro Profumo during an official ceremony held at the event, attended by (former) Italian Defence Minister, Elisabetta Trenta.

The objectives of a collaboration between Leonardo and the Italian Air Force are to further exploit the training capabilities provided by the 61° Stormo (Wing), based in Lecce-Galatina, and to establish a new IFTS to support both national and inter- national pilot training. During the signing ceremony, Alessandro Profumo made the company’s ambitions clear, “Leonardo has to move from being a platform sup- plier to being a service provider as well. We aim to become the international flight training school for air forces worldwide.”

The IFTS was initiated with the objective to consolidate the growth and the internationalisation process of the Italian Air Force (AM) flight school by increasing capacity and the range of courses available to foreign countries. This will allow growing demands in advanced flight training from allied and partner air forces to be satisfied. The IFTS will primarily provide: advanced Phase IV courses of the AM training syllabus, the Lead-In to Fighter Training (LIFT) phase, this will adequately prepare the student pilot to handle the latest 4th and 5th generation fighter aircraft like the F-16 or the F-35 in an operational environment.

When IFTS reaches its full operational capability (FOC), the school will be able to offer up to 80 courses annually, 20 training positions for Italian Air Forces student pilots and 60 available to pilots of foreign allied countries, therefore doubling the current 35-40 pilots trained annually.

The IFTS training syllabus will be based on the current versatile AM modular syllabus exploiting Leonardo’s innovative integrated training system (ITS). The advanced training courses offered will consist of a standard set including air- to-air and air-to-ground modules that all student pilots must complete. The standard package can be expanded by additional modules such as advanced air-to-air training, advanced air-to-ground training with sorties to the polygon range, the use of Night Vision Goggles (NVG), aerial refuelling and specific training focused on the use of sensors, datalink and electronic warfare. In total six differ- ent courses will be available, and slightly more than half of the total amount of sorties during the course(s) will be flown in the simulator.

The IFTS will offer tailored training modules to meet specific needs of other countries’ Air Forces. This is achieved by a detailed analysis of the training pro- gramme run by the relevant air force, with basic training included. With this approach training can be optimised improving capabilities of the (foreign) student pilot while reducing the amount of training required in an Operational Conversion Unit (OCU) saving cost in terms of expensive flight hours, time and resources. The IFTS project foresees in the short term a relocation of the school to exploit the full potential of the T346A ITS, enabling at the same time a further expansion of advanced flight training capacity to an estimated 8,000 flight hours annually.

The relocation of Phase IV to a different base will create spare capacity at Galatina to enhance basic training capacity offered by 61° Stormo with the introduction of the M-345 integrated training system. The amount of T-345A (AM designation of the M-345) training flights could be increased up to the maximum operational capacity of 61° Stormo at the airbase, approximately 12,000 flight hours a year.

At the 2019 Paris Airshow held at Le Bourget in June, Decimomannu, located in the southern part of the island of Sardinia, was announced as the second training base alongside Lecce-Galatina. In 2021, IFTS will move to its new, dedicated facility, which will also entail the relocation of all 22 T-346s to Decimomannu.