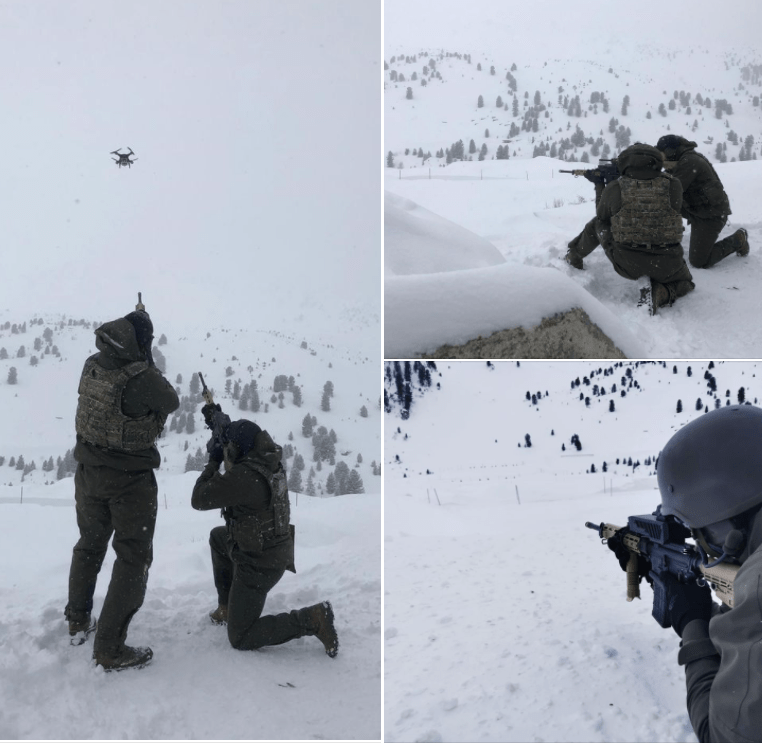 The test took place in the Austrian High Mountains, as part of the Dutch Defense Department examination of different ways to combat small unmanned systems. Smart Shooter  will be exhibiting at IDEX 2021.

Tested at a range of up to 200 meters, in harsh weather conditions, fog, and blowing snow, the SMASH Fire Control successfully hit all 67 drone targets with up to 3 shots each. It made no difference whether the drones were stationary in the air or moving.

Reporting about the trial on its Facebook channel, the Dutch armed forces said that with the Smart Shooter SMASH Fire Control System, soldiers are able to deliver a locked shot at ground targets and drones, therefore significantly increasing hit probabilities. The RAS (Robotic Automated Systems) platoon of the 13th Light Brigade tested the SMASH in Austria at the tactical level. However, the system may also be of value in protecting sensitive strategic assets such as air force bases, ships, or in military operations abroad. Testing the intercept capability fits within the roadmap of the Nucleus C-UAS of the Dutch armed forces.

SMASH is a combat-proven Fire Control solution for small arms that ensures each round finds its target. Bringing precision-missile targeting algorithms and advanced electro-optical processing capabilities into standard assault rifles, Smart Shooter’s SMASH Fire Control Systems works automatically but not autonomously, and allows the operator to quickly and effectively neutralize any ground or airborne target, manned or unmanned. It is a cost-effective solution that can be integrated onto any type of assault rifle and combined with other C-UAS systems to provide an effective multi-layer defense solution suitable for the modern battlefield.

“Smart Shooter’s SMASH Fire Control Solution is an ideal hard-kill solution against drones and UASs, ensuring high hit probabilities while requiring very minimal training,” said
Michal Mor, Smart Shooter CEO.  “We are happy to learn about another successful trial that the Dutch army conducted, and are confident the SMASH technology will completely revolutionize the world of small arms.”