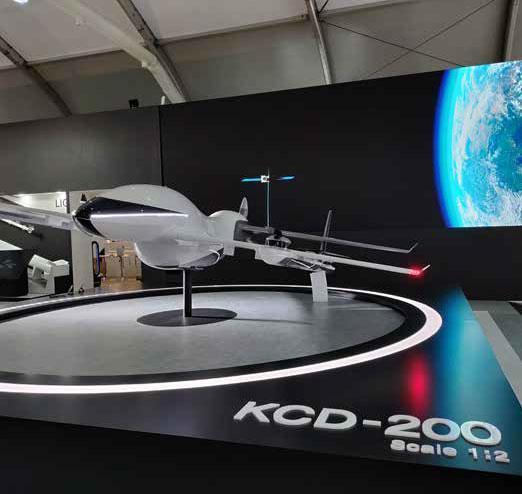 LIG Nex1’s hydrogen drone, which can carry 200 kilograms of cargo, is turning heads at ADEX 2021. The company was selected by the Ministry of Trade, Industry and Energy to carry out the 44-billion-won (US $38.8 million) national project for the development of autonomous cargo drones powered by hydrogen fuel cells. The development is expected
to be completed by 2025 and the drone will be used by the military for transportation. The company also plans to use a version of the drone for urban air mobility operations.

LIG Nex1 is also exhibiting a model of the Korea Positioning System (KPS), which is a joint effort by a group of companies and the government to build the country’s own satellite navigation system by 2035. The project is expected to cost about US$3.3 billion. If the project is approved by the National Assembly, work will commence on launching eight new satellites, three into geosynchronous orbit and five into inclined geosynchronous orbit. The
first satellite for KPS is scheduled to be launched in 2027, with a trial service in 2034 to be followed by a full-fledged one the following year.

The company has a wide range of products that include precision guided munitions such as the Mid-range Surface-to-Air Missile (M-SAM) that intercept medium-altitude aerial threats, the Mid-range Surface-to-Air Missile block-II(M-SAM II), an improved version of M- SAM with upgraded engagement and anti-ballistic capabilities, short-range surface-to-air missile to intercept enemy aircraft and helicopters, portable surface-to-air missile to defend major field forces and military facilities against enemy aircraft and helicopters attacking from the air.

The Korean GPS Guided Bomb (KGGB) is a medium-range air-to surface guided weapon with extended range and accuracy with GPS guidance kit mounted on a conventional general-purpose bomb. The company also has been making roads into the market in terms of avionics, electronic warfare, and unmanned systems.