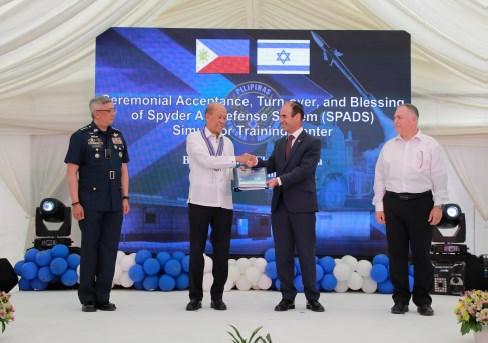 “As your defence chief for nearly six years, my happiest and proudest moments were the attainment of milestones in the Armed Forces of the Philippines (AFP) Modernization Programme,” he said during the inaugural event, which was also attended by Philippine Air Force (PAF) Commanding General Lieutenant General Connor Anthony Canlas, Ambassador of Israel to the Philippines Ilan Fluss, and other officials from the AFP and Rafael Advanced Defence Systems.

Secretary Lorenzana urged the PAF to take advantage of the new facility and prepare for more assets to come. “May this new simulator training center inspire you to look into the Command’s bright future, utilize its capabilities to ensure the success of your missions,” he said.

The Philippine Air Force Spyder Air Defence System simulator training center aims to develop three different capabilities, namely, detection through radar, command and control, and missile firing. It is also custom-made for the men and women of the PAF to utilize in their training on advanced air defense techniques.