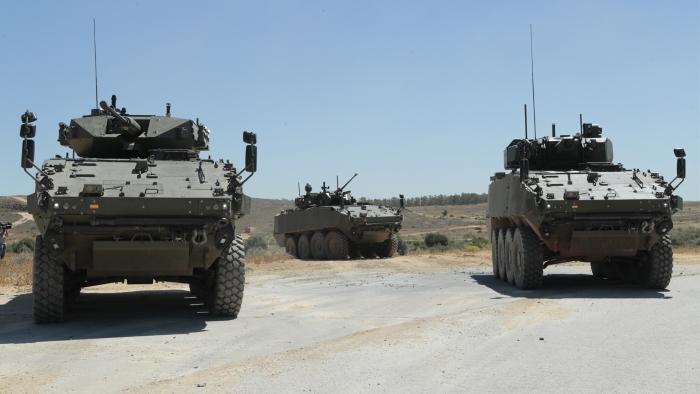 Indra has received an initial contract worth Euro 150 million to equip 348 8×8 Dragon Wheeled Combat Vehicles (WCVs) procured by Spain’s Ministry of Defence with an advanced state-of-the art Mission System and electronic architecture. The 8×8 WCV programme is one of the cornerstones of the Spanish Army’s Force 35 initiative to prepare for the future battlefield.

The WCV 8×8 Dragon is being developed to be the most digital vehicle on the market and the Indra supplied Mission System is key aspect of the programme and according to Indra the mission system is also a key element from a national sovereignty point of view as its ownership by Spain will make possible any future future upgrades and modifications, without being dependent on third parties.

Indra’s Mission System enables its operation to be carried out in an increasingly collaborative scenario, in which tactical information is shared by geographically dispersed forces to carry out the mission.

The new Mission System will possesses a high-capability electronic infrastructure and a powerful information processing, analysis and storage capacity, both of the on-board equipment and of the relevant information for the mission. Its open and modular architecture will facilitate the incorporation of new systems such as the full provision of the LSAS, where its pre-installation will be carried out in this phase, as well as the upgrades of the initial equipment in a straightforward manner throughout the vehicle’s life cycle, which guarantees its technological advantage.

The BMS (Battlefield Management System) is one of its main components and provides, based on the vehicle’s position and direction and on the real-time situation information, will assess which is the best option to ensure the success and completion of the mission, thus accelerating the decision loop.

Indra is also participating in a solution to provide the WCV 8×8 Dragon turrets. If this solution is selected, the company will supply the turret with the optronic technology and the fire control system with its ballistic calculation software.

The company will develop this project within the company TESS Defence, of which it is a partner, together with Santa Barbara, Sapa Placencia and Escribano Mechanical & Engineering. As well as implementing the Mission System and participating in turret production, Indra will be responsible for the maintenance and support of the vehicle’s life cycle and will assist in its international sales and marketing.