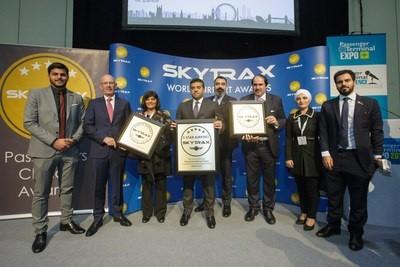 Hamad International Airport has been ranked as the fourth best airport in the world at the SKYTRAX World Airport Awards 2019, which took place during the Passenger Terminal Expo 2019 in London, United Kingdom.

The awards recognize HIA’s innovative facilities, five-star customer service and state-of-the-art terminal which accommodates more than 30 million passengers annually. The 2019 World Airport Awards by Skytrax are based on nominations from millions of passengers across more than 500 participating airports worldwide, making them one of largest passenger interaction survey awards in the world.

Commenting on the results of the Skytrax World Airport Awards, Engr. Badr Mohammed Al Meer, Chief Operating Officer at Hamad International Airport, stated, “We are delighted with our progress and ranking at this year’s Skytrax Awards as we successfully moved up in our ranking to ‘Fourth Best Airport in the World’ while maintaining our five-star status and our titles as ‘Best Airport in the Middle East’ for the fifth consecutive year and ‘Best Staff Service in the Middle East’ for the fourth consecutive year. We are committed to raising the bar when it comes to the airport experience and will continue to invest in our facilities, services and technologies that distinguish us as the airport of choice for millions of passengers around the world.”

“Skytrax holds a very special place for all us at HIA, because it’s a platform for our passengers and travellers to share their view on their experiences with us. We are truly honoured and humbled by the support and loyalty of our customers and are motivated more than ever to continue to deliver excellence and meet the needs of our passengers and community at large,” Al Meer added.

The Skytrax survey evaluates customer satisfaction across 39 key performance indicators for airport service and product – from check-in, arrivals, transfers, shopping, security and immigration, through to departure at the gate.