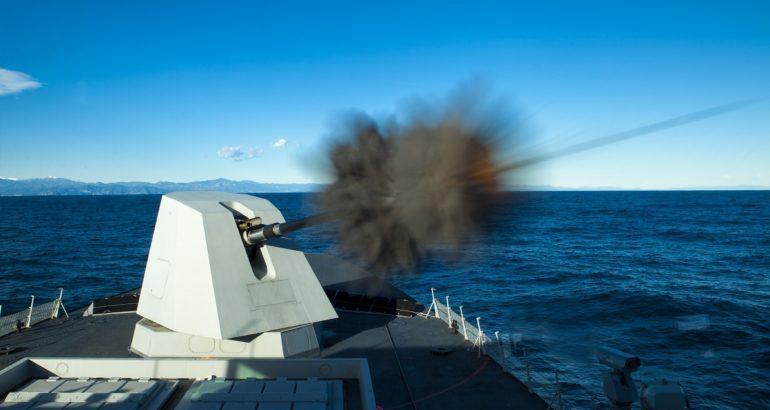 The OTO 127/64 LW Vulcano is the best performing gun system on the market and it is the only one integrated with 127 Vulcano guided ammunition. Its highly flexible architecture overcomes installation constraints to fit on all types of platforms

Leonardo will supply to Lockheed Martin Canada the four naval guns, including the Automatic Ammunition Handling System (AAHS) as an optional solution, for the new Canadian Surface Combatants (CSC), which will be built by Irving Shipbuilding Inc. at the Halifax shipyard in Nova Scotia. The first three systems will be installed on-board the new naval units, while the fourth will be used for training activities.

The CSC programme’s aim is the construction of 15 advanced and multi-mission combat ships as part of the broader National Shipbuilding Strategy, a long-term project focusing on the renewal of the entire Canadian fleet.

Already chosen by six navies in the last ten years, the OTO 127/64 LW Vulcano is the best performing gun system on the market, equipped with a highly flexible architecture that allows installation on all types of platforms. Its state-of-the-art technology and complete digitalization ensures continuous assistance to operators and constant support to the on-board Combat Management System (CMS) through the calculation of possible shooting solutions during mission planning.

The system is the only one in the world seamlessly integrated with the Vulcano 127mm ammunition, both in the Guided Long Range (GLR) and the Ballistic Extended Range (BER) versions. Additionally, Leonardo’s 4AP fuze for conventional ammunition ensures high operational flexibility based on its mission-specific configuration programmability features. The OTO 127/64 LW Vulcano operates effectively even in the absence of a crew, thanks to Leonardo’s AAHS solution, which guarantees automatic gun reloading by managing both Vulcano long-range precision strike and conventional ammunition simultaneously.

Leonardo’s interests and opportunities in Canada span from naval systems to helicopters to airport solutions to logistics. Operating in Ontario and Nova Scotia, Leonardo DRS has been a long-standing supplier of advanced naval communications, surveillance and power conversion systems to the Royal Canadian Navy for over 30 years.

Leonardo DRS’ Ottawa facility will participate in the production of select system components, contributing to direct ITB commitments. Leonardo will also involve and invest in the growth of Canadian small and medium local enterprises, engaging with potential partner companies present in Ontario and the Atlantic provinces. In addition, Leonardo is also looking to structure collaborations with academic institutions.