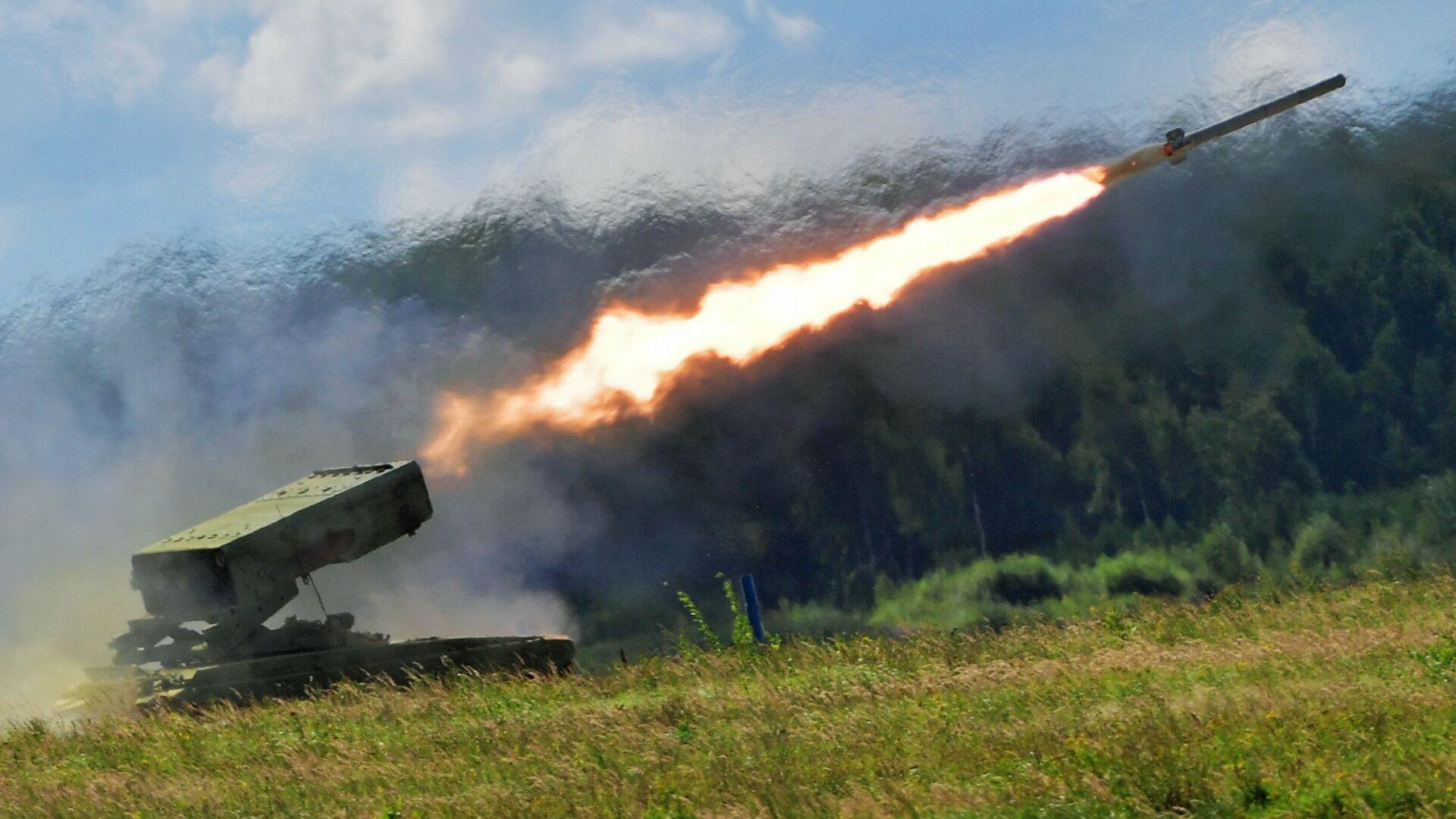 Russia’s Heavy Flamethrower System (TOS) will be updated, with newly released vehicles to be modernized first.  The combat vehicles will have added firepower as well as increased security features and range after the upgrade.

Sources in the military department told Izvestia that a decision to modernize TOS-1 “Buratino” and TOS-1A “Solntsepek” has already been made. Systems already supplied to the troops will be upgraded when they are brought in for repair.  The modernized TOS is expected to  radically increase the capabilities of Russian troops on the battlefield.

“Heavy flamethrower systems fire directly to the front lines,” said Viktor Murakhovsky, a military expert. “With the help of the new equipment, they will be able to act also from closed positions. The automated guidance system will eliminate errors that can be introduced by the human factor.

“The speed of preparing data and weapons for shooting will increase,” added Murakhovsky. “The modernized heavy flamethrower systems can be used as an element of reconnaissance and strike systems as well. And given that one of its variants – TOS-2 – has received a wheelbase, this will significantly increase its operational mobility and service life. This equipment will continue to occupy a worthy place among weapons systems and will even expand its niche.”

The upgraded TOS will have a closed data transmission segment, known as the “Defence Data Network” or Military Network (MILNET). This will make it possible to integrate the vehicles not only into reconnaissance and fire circuits but also into the most modern Automation Control System (ACS) of the tactical level, by receiving a direct real-time live feed of information and coordinates of targets, as well as combat tasks and march routes. Subsequently, it is planned to adopt the latest long-range ammunition used so far only by TOS-2 “Tosochka”.

According to the defence Ministry, the massive application of the TOS-1A had already been tested earlier at the “Centre-2019” exercise. The use of the long-range missiles TBS-4M with thermobaric equipment was  also tested in the TOS-2 during the “Caucasus-2020” exercise.

The first samples of TOS-1 had a range of only 3.5 km. Subsequently, it was increased to 6 km. However, the new ammunition tested at the exercise in 2020 will increase the range up to more than 15 km.

The introduction of Automation Control Systems (ACS) will make it possible to increase artillery firepower. According to the Ministry of defence, military personnel regularly practice strikes on targets a few minutes after they were detected by intelligence. It is the ACS that allows modern artillery systems to hit targets with the first volleys, and then quickly move and deploy to new positions to avoid a counter-attack.

The coordinates of enemy targets are detected by reconnaissance, radar and drones. Data about them go to the ACS, and from there to the artillerymen. Automation helps in quickly calculating the necessary data to open the fire. For each gun, its exact position on the ground and characteristics are individually taken into account, and its task is assigned.

The latest state of art systems, such as “Tornado-G” and “Tornado-S”, as well as the self-propelled artillery unit “Coalition-SV”, already have the necessary equipment for operation under the control of the ACS. Even a digital map of the terrain, which displays the position of his vehicles and enemy targets, is available to the commander. During the deep modernization, a set of necessary electronics of the 2C3 “AKatsiya” and 2S19 “Msta-S” self-propelled guns will be received.

Similar equipment will appear on heavy flamethrower systems in service with the Nuclear, Biological and Chemical Protection Troops (NBC Protection Troops). Now they can also be integrated into existing artillery fire control systems and reconnaissance and fire circuits.

During the Soviet era, the TOS was included not in artillery units but the NBC Protection Troops. The situation still persists. Due to the short range of fire, TOS often operated on the front line, sometimes under enemy fire.  Since the beginning of this century, an improved version,  designated TOS-1A ” Solntsepek,” has been supplied to the troops. Both models are now in service. Pilot operation of the more mobile heavy flamethrower system “Tosochka”,  based on a truck, has also begun.