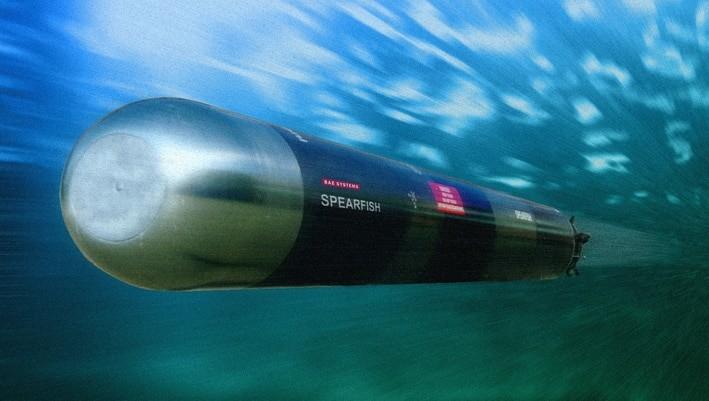 Even more lethal: An upgraded Spearfish heavyweight torpedo will soon enter the service with the British Royal Navy. : Sep 16, 2020 - : 5:21 pm

An upgraded Spearfish heavyweight torpedo will soon enter the service with the British Royal Navy after the improved weapon completed extensive trials in Scotland.

The advanced torpedo – the principal weapon of the UK’s Submarine Flotilla against enemy ships and submarines – was ‘fired’ repeatedly at frigate HMS Sutherland as scientists, engineers and sailors studied its performance.

Over four days on special ranges near the Kyle of Lochalsh, the improved weapon was put through its paces, testing both software and hardware enhancements – while the Plymouth-based frigate did its utmost to fend off the torpedo’s attacks, a Royal Navy official informed.

Spearfish has been the Silent Service’s weapon of choice since the early 1990s, though it has never been fired in anger. The warhead is a good six times more powerful than that carried by the smaller Sting Ray torpedo, fired by ships like Sutherland or launched from Merlin and Wildcat helicopters. It can break the back of frigates, destroyers and similar-sized warships, and take out any underwater threats.

The Royal Navy is investing £270m in upgrading Spearfish, fitting a new warhead, new, safer fuel system, an enhanced electronic ‘brain’ and a new fibre-optic guidance link with its parent submarine to improve its accuracy and lethality.
A team of around 100 engineers and experts from BAE Systems in Portsmouth have spent nearly six years working on the improved torpedo, which will be introduced to front-line hunter-killer and nuclear-deterrent submarines over the next three years – and in service into the 2050s.

The latest trials are the fourth involving Sutherland – which is purpose-built to hunt down hostile submarines – to help introduce the new Spearfish into service.

For the latest workout at the British Underwater Test and Evaluation Centre – a stretch of water between Skye and the Scottish mainland which is ten kilometres long, six wide, up to 200 metres deep and peppered with state-of-the-art sensors – the frigate was assessed to see if she could defeat the new-look Spearfish, using a mix of evasive manoeuvres to evade the torpedo and advanced acoustic counter-measures to lure it away from Sutherland.

Anyone expecting tell-tale submarine wakes streaking through the waters was disappointed as Spearfish was set to ‘run deep’ for safety reasons – so the ‘battle’ was played out on the displays in Sutherland’s operations room, where the shrill sound of whistles announced a torpedo in the water.

“During the trial this week we have put our elite training into action, using a variety of underwater sensors to locate and track the weapon,” said 23-year-old Able Seaman Matthew Brown from Perth, one of the underwater warfare specialists who’s been tracking Spearfish. “Having one of the most advanced and capable torpedoes in the world fired at you certainly puts the pressure on.”

Modern submarines require sophisticated defensive and offensive underwater weapons to engage a wide range of surface and subsurface targets. Guided torpedoes provide this capability and Spearfish is one of the most powerful and capable torpedos in the world.

BAE Systems provide full support of Spearfish to the UK Royal Navy through a dedicated support ‘workshop to waterfront’ contract.

“Now in the final phase of a major upgrade programme, Spearfish will benefit from significant advances in its homing, warhead and tactical systems. Together with a high bandwidth fibre optic data link between the torpedo and the launching vessel’s combat system, it is the most effective targeted weapon in its class addressing the present day and projected threat over the coming decades,” according to BAE Systems.

Modular hardware implements provide readily replaceable components, for maintainability and to enable reduction in through life operating costs for the MOD. The upgraded weapon will be re-programmable “through the skin” to incorporate latest developments in sonar technology and to take account of intelligence on the evolving threat characteristics.

Weapon Engineer Officer Lieutenant Commander David Tinsley added, “This is not the first time Sutherland has contributed to Spearfish trials, and we’re glad to be supporting a small part of a larger Defence programme which will deliver a world class weapon into Service. “A range of military and industrial partners have come together to deliver an efficient trial which in due course will deliver another exciting capability for the Royal Navy.”

Following the torpedo trials, Sutherland moved on to join the Americans, Norwegians and Danes on exercise in the Arctic. A final trial of Spearfish will take place at BUTEC later in 2020 before the weapon is declared operational and begins being delivered to the submarine fleet.