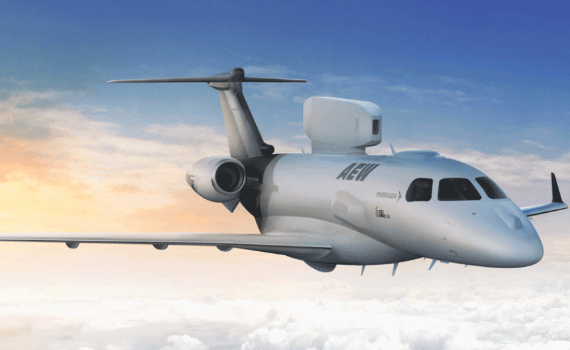 ELTA, the electronics subsidiary of Israel Aerospace Industries (IAI) believes in business jets as the best platform for AEW aircraft.

ELTA has signed a Strategic Cooperation Agreement with EMBRAER to offer the market a new version of AEW aircraft based on EMBRAER’s P-600 business jet.

ELTA has supplied AEW aircraft based on the Gulfstream G-550 to the Israeli, Italian and Singapore Air Forces.

Designed to compete in a new segment of the AEW market, this next generation aircraft is based on the advanced super midsize platform of the Embraer Praetor 600 business jet. The primary sensor of the P600 AEW is the IAI/ELTA 4th generation Digital Active Electronically Scanned Array (AESA) radar with integrated IFF capabilities.

According to the companies, the P600 AEW addresses the growing market of Intelligence, Surveillance and Reconnaissance capabilities for countries that require cost-effective, high performance and flexible solutions for defense and homeland security missions.

The companies say that the P600 AEW can provide an extended Air Situational Picture by monitoring aerial activity in areas outside ground radar coverage. It can perform various missions such as Air Defense, Early Warning, Command and Control, Fighter Fleet Efficiency, Territorial Defense, and Maritime Surveillance.

A comprehensive communications suite allows for data link capability as well as satellite communication for operations beyond the line of sight data link. It also secures interoperability with allied forces. Network centric warfare (NCW) capability transforms the P600 AEW into a member of a tactical network. An advanced self-protection system (SPS) performs the detection of potential threats activating any required electronic support measures.