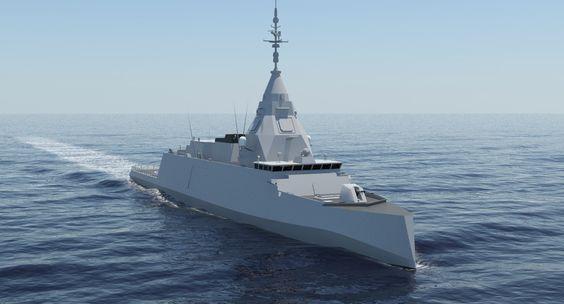 Naval Group is participating in the 2020 online edition of Euronaval with a range of products including the new combat ship Belharra.

Belharra is designed for navies looking for a compact frigate able to perform a large range of missions stand-alone or within a task force either. According to a company official Belharra features high level capabilities in anti-air, antisurface, anti-submarine and asymmetric warfare domains, taking into account French Navy operational legacy acquired in wartime situation.

As the first digital frigate, Belharra integrates latest-generation systems around a naval digital distributed cloud architecture, natively cyber-secured and compatible with the new Information Technologies developments and evolutions and provides sailors with adapted services. Different versions are available to embrace the specific needs of each navy.

The next on the product line is the Gowind, a military-engineered compact surface combatant equipped with a set of state-of-the-art, combat-proven anti-submarine, anti-surface and anti-aircraft systems to NATO standards. Gowind takes the best of the latest technological advances developed and mastered by Naval Group for large frigates, in order to anticipate and meet future operational requirement.

It integrates the latest generation of combat systems developed by Naval Group, SETIS®, the “Panoramic Sensors and Intelligence Module (PSIM)” – a combination of the integrated mast with its various sensors and the Operational Centre and associated technical premises – and the high level of integration, automation and user-friendliness of the Naval Group systems.

Naval Group integrates all types of drones -air, surface and underwater- to increase the operational capabilities of an armed fleet, the official says.

These innovative assets are crucial force multipliers provided that they are seamlessly integrated into the ships. “Our innovative solutions encompass drones launch and recovery under any sea conditions, the management of multi-drones missions and the real time broadcast of the information through CMS, which significantly develops the contribution of drones to naval forces,” he says.

Other products on display include:

The Barracuda family of submarines brings unmatched oceanic potential to the market and offers uncompromised performance in acoustic discretion, special operations, stealth and striking power. The ship allows the navies to operate far from their homeport, freely and safely while gathering valuable information without being detected.  Resulting of long investment in acoustic superiority inherited from the French SSBN, its robust design makes it the best attack submarine.

The Scorpene submarine is capable of carrying out all types of missions, such as anti-surface vessel warfare, anti-submarine warfare, long-range strikes, special operations or intelligence gathering. It is extremely stealthy and fast, and is equipped with a comprehensive range of weapons (torpedoes, missiles, mines).

Over 14 Scorpene submarines were sold by Naval Group internationally. Naval Group is capable of adapting it to very specifics operational and industrial requirements, creating long term partnership of trust with navies throughout the life of the submarine, covering the whole spectrum of development and industrial sovereignty of each country and a user club that joins them under common interests.