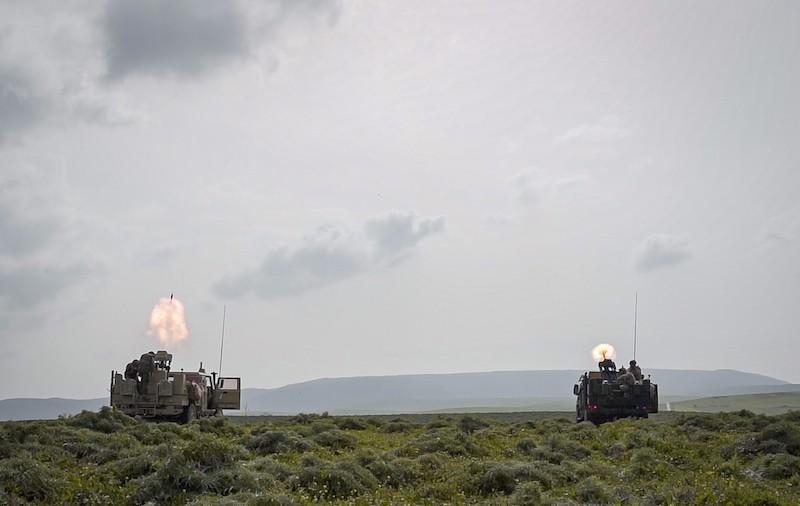 Expal has completed an important demonstration of its Dual-EIMOS Mortar system on Light Vehicle for the Spanish military at the Retín Training Field in Cádiz.

Until now, there has been no on-board mortar system with deep fording capability on the market globally

The demonstration was attended by Spanish military top brass  – Chief of Staff of the Navy (AJEMA), the Lieutenant General Chief of Logistic Support Command (JEMALE) and the Commandant General of the Marine Corps (COMGEIM).

“The deep fording capacity that Dual-EIMOS has acquired, the main singularity of the system, has been extensively tested during the program’s test plan, including the latest successful results during its disembarking on the beach” explains Alberto Fernández Cuervo, Product Manager of the EXPAL Systems.

Two new Dual-EIMOS versions, operated by a Marine Infantry crew, and the EIMOS 2018 version, operated by the Legion Brigade took part in the demonstration, highlighting the interoperability of both systems.

The Dual-EIMOS is a system developed from EIMOS 2018, within the framework of an R&D Program with the SDGPLATIN (DGAM).

It has been tailored to the Navy’s General Staff Requirements, with important improvements in aspects such as its versatility and precision.

The new system also maintains the operational advantages of EIMOS 2018, clearly oriented to shoot and scoot, through characteristics such as maneuverability, 360º shooting without the need for additional supports and even in motion, with the aim of providing maximum efficiency in mission, and ensure survivability.