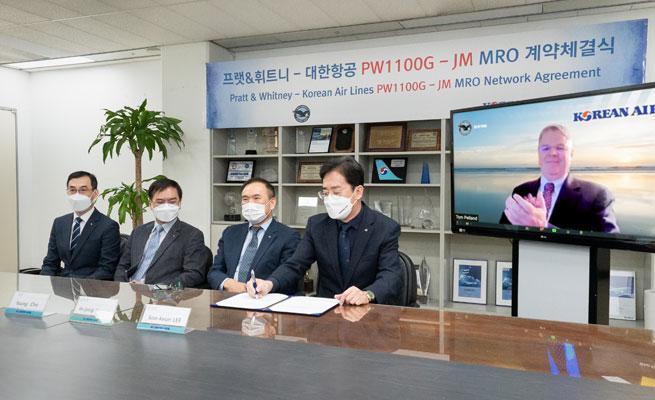 Pratt & Whitney will expand its global network of providers that maintain the Pratt & Whitney GTF engine to Korean Air’s Maintenance and Engineering Division.

The facility will serve PW1100G-JM engines for the A320neo family with full disassembly, assembly and test capability.

With more than 10,000 engine orders and commitments from more than 80 customers, GTF engines now power more than 1,100 aircraft with 56 operators across three aircraft families.

“Pratt & Whitney has enjoyed a long-standing relationship with Korean Air dating back to the late 1960s, and today we are excited to welcome them to the GTF MRO network,” said Marc Meredith, executive director of GTF Engine Aftermarket at Pratt & Whitney. “Seeing both sides of the equation – operation and maintenance – Korean Air has the experience we expect of our network providers.”

Korean Air is the eighth facility announced in Asia that will support GTF MRO work. Three shops are currently active, including MTU Maintenance Zhuhai in China, Pratt & Whitney’s Eagle Services Asia (ESA) in Singapore, as well as IHI, which is part of JAEC, in Japan.

“We are excited to be joining the trusted network of GTF MRO service providers. Since 2018, we have been flying GTF-powered A220 aircraft, with ten currently in our fleet. We are looking forward to next year, in which we expect to take delivery of our first GTF-powered A321neo aircraft,” said Mr. Sookeun Lee, Executive Vice President and Chief Operations Officer at Korean Air.