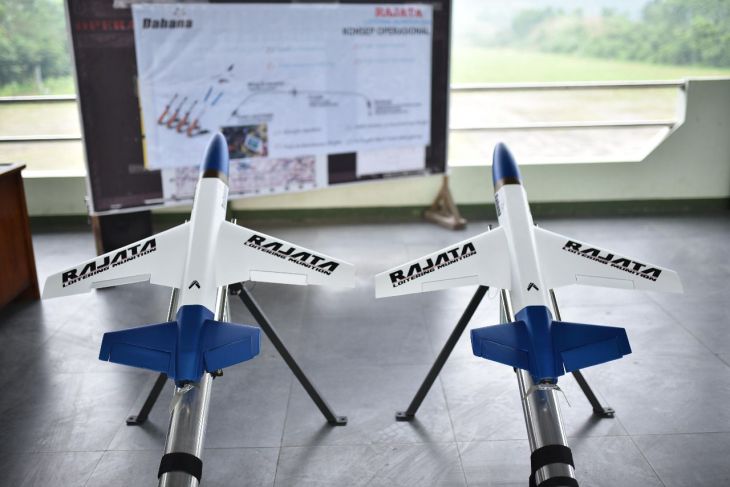 Indonesian state-owned company PT Dahana released a specification of the Rajata loitering munition prototype, as reported by an Indonesian defense blog. The company introduced the drone on 22 July this year without revealing its specifications.

“Rajata technology allows personnel who use it to destroy targets without the enemy knowing. Rajata can be an alternative solution to missiles as the latter is more economical, and has a much higher accuracy rate compared to rockets,” said Suhendra Yusuf RPN, PT Dahana’s Director of Technology and Development during the drone’s launching event last July.

According to indomiliter.com, Rajata loitering munition prototype has a dimension of 994 mm in length and a 920 mm wingspan. Due to the heavy usage of composite materials in its construction, the drone has a total weight of around 2.5 kg, including 800-gram of a high explosive warhead.

The drone is launched via a pneumatic launcher to propel it to its initial speed of 150 km/h. Powered with an unspecified electric motor driving a two-blade propeller, it has a top speed of around 200 km/h, a maximum range of 30 km (10-15 km effective), and a 15-minutes endurance.

While the prototype carries an off-the-shelf commercial camera and a GPS navigation system, PT Dahana also revealed that an anti-jamming navigation/targeting system is in the works.

Developed as a joint project between PT Dahana and AeroTerrascan, a private Indonesian company in drone development and manufacturing, both companies expect the Rajata loitering munition to be adopted by the Indonesian military and exported abroad. Currently, the drone is still in heavy development and testing phases based on inputs from the Indonesian Army (TNI-AD) as its prospective first user.